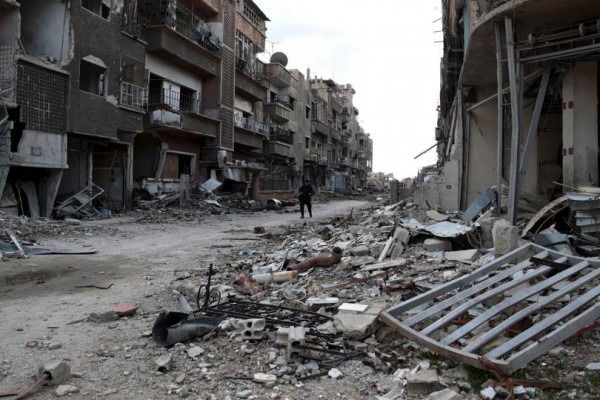 Thirty-three civilians were killed by what were believed to be Russian airstrikes in Syria Saturday, Agence France-Presse reported. The deaths came as diplomats prepared for another round of peace talks next week and U.S. authorities announced they were ready to find a military solution to the problem posed by the Islamic State group in Syria in the event a political one does not work out.

“We do know it would better if we can reach a political solution but we are prepared … if that’s not possible, to have a military solution to this operation in taking out Daesh,” said Vice President Joe Biden, who was using another name for the militant group aka either ISIL or ISIS, while speaking at a press conference with Turkish Prime Minister Ahmet Davutoglu, Reuters reported.

The suspected Russian airstrikes Saturday hit eastern Syria, with the Syrian Observatory for Human Rights reporting that nine children were killed in Khasham, an area controlled by the Islamic State group. Russia began carrying out airstrikes in Syria in September with avowed aim of defeating the militant group, but Western officials have accused the Kremlin of targeting other opposition organizations to prop up its longtime ally, Syrian President Bashar Assad.

As the war on the Islamic State group grinds on, U.S. forces are building an air base in Syria’s northeastern Hasakah province, AFP reported. Meanwhile, the Pentagon said there had been no “change to the size of mission of the U.S. presence in Syria.” American President Barack Obama authorized the presence of special forces in Syria in October.

Diplomats are expected to hold peace talks in Geneva next week, seeking a political resolution of the Syrian Civil War, which got under way almost five years ago. However, officials were still undecided about who would represent the Syrian opposition at the table.

“We are confident that with good initiative in the next day or so those talks can get going,” said U.S. Secretary of State John Kerry, who was in Saudi Arabia Saturday.

Begun in March 2011, the Syrian Civil War has taken the lives of more than 250,000 people and the homes of millions of others.