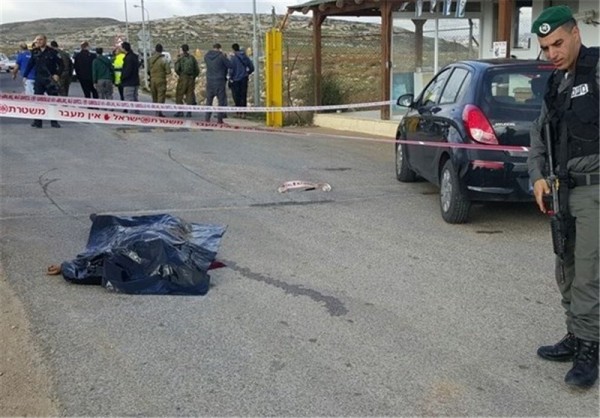 A 13-year-old Palestinian girl was fatally shot by an Israeli security guard at the entrance to a West Bank settlement on Saturday after she ran at him with a knife, according to the Israeli police.

The girl was identified by the official Palestinian news agency Wafa as Ruqayya Eid Abu Eid, a resident of the Palestinian village of Anata. The village is about a mile from the settlement of Anatot, where the attempted stabbing and killing occurred.

Ms. Abu Eid quarreled with her family on Saturday morning and then left her home with a knife “intending to die,” the police said in a statement. She arrived at the settlement at about 8 a.m., the police said, and ran toward the civilian guard at the entrance, who opened fire.

The girl’s father, who was looking for her, arrived at the settlement soon after she had been shot. The police detained him for questioning.

The shooting on Saturday came amid a wave of Palestinian stabbings and attempted stabbings, car rammings and gun attacks that have killed about 25 Israelis, an American student and one Palestinian bystander since Oct. 1. About 150 Palestinians have been killed during the same period. Up to two-thirds of them have been described by Israel as assailants. Others have been killed during protests and clashes with Israeli security forces in the West Bank, East Jerusalem and along Israel’s border with Gaza.

An Israeli mother of six, Dafna Meir, was stabbed and killed in the doorway of her home in a West Bank settlement on Jan. 17, and a pregnant woman was injured in a separate attack in another settlement a day later. In both cases the suspects, who are both under arrest, were 15-year-old Palestinian boys.

Palestinian teenagers have carried out many of the stabbings or attempted stabbings, and in one case an assailant was as young as 12. In November, two cousins, ages 12 and 14, were arrested after they attacked an Israeli security guard on a light railway train in East Jerusalem, not far from their homes. In that case, relatives said the cousins had set out after watching video clips leaked from the interrogation of a 13-year-old Palestinian who was accused of participating in the stabbing of a 13-year-old Jewish boy and another Israeli civilian in East Jerusalem the month before.

The Palestinian authorities and local and international human rights groups have accused the Israeli police, the military and in some cases private security personnel and armed civilians of reacting with excessive force. Israel strongly rejects those accusations, saying that Israelis were acting legitimately in self-defense.