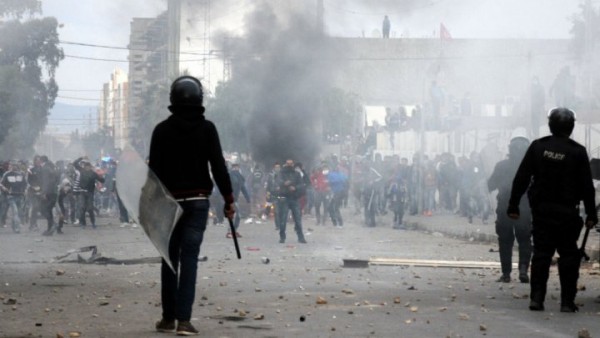 Protesters face off against police in the Tunisian city Kasserine on January 21, 2016. Mohamed Khalil, AFP
Share:

Tunisia on Friday declared a nighttime curfew across the country to try to calm the most serious outbreak of social unrest since the 2011 revolution.

Anger erupted over the death on Saturday of an unemployed young man who was electrocuted when he climbed an electricity pole while demonstrating in central Tunisia.

The interior ministry said the 8pm to 5am curfew was necessary to prevent damage to property and to ensure public safety.

“Anyone disobeying this decision risks prosecution, apart from medical emergencies and those working at night,” it said in a statement.

Authorities called for calm after 16 people were arrested on vandalism charges in a suburb of Tunis, the latest incident in almost a week of unrest.

An AFP journalist reported that two household appliance stores and a bank branch had been ransacked on the neighbourhood’s main street and a police post had been burnt.

In central Tunisia, security forces have clashed with protesters in several towns, including in Kasserine where the unrest started, using tear gas against them.

At least three police stations have been attacked over the past 24 hours and 42 members of the security forces have been wounded, the interior ministry said.

“This is the most serious social crisis since 2011,” independent analyst Selim Kharrat told AFP.

The unrest has echoes of the public anger unleashed by the death of a street vendor who set himself on fire in December 2010 in protest at unemployment and police harassment.

That desperate act of defiance provided the spark for the uprising that overthrew Ben Ali and inspired revolutions around the region.

While Tunisia is hailed as a rare success story of the Arab Spring uprisings that swept across the region, the authorities have failed to resolve the problems of social exclusion and regional inequalities.

Tunisia also faces jihadist violence including attacks claimed by the Islamic State group last year at the national museum and a beach resort that killed a total of 60 people, all but one of them foreign tourists.

The authorities on Friday urged Tunisians to be patient with them.

“We would like people to show a little wisdom and know that it is in our interest to safeguard Tunisia,” Kamel Ayadi, minister for public services, governance and the fight against corruption, said on the radio.

Tunisian Prime Minister Habib Essid told FRANCE 24 on Friday that his government is committed to tackling unemployment as protests spread across the North African nation in recent days.

Essid’s exclusive interview with FRANCE 24 came as his government announced a nationwide curfew starting at 8pm on Friday following protests in several cities over high unemployment rates that left at least one person dead.

“We are aware of our difficult mission … and fully aware of the situation,” said Essid. “But we are a young democracy. And in youth, there is a period of adolescence to navigate.”

Since he was nominated as prime minister a year ago, Essid has faced a host of challenges on both security and economic fronts.

Tunisia has the dubious distinction of exporting the highest number of fighters to the Islamic State (IS) group in Syria and Iraq. More than 3,000 Tunisians are believed to be fighting in the Middle East.

Instability in neighbouring Libya has also increased the security threat, with terrorist attacks over the past year targeting the Tunisia’s critical tourism industry. A March 2015 attack on the National Bardo Museum in Tunis killed more than 20 people, mostly European tourists. Three months later, two hotels were attacked in a tourist resort north of the city of Sousse.

Meanwhile poverty has been increasing. Unemployment stood at 15.3 percent in 2015, up from 12 percent in 2010 due to weak growth and lower investment.

On Wednesday, Tunisian authorities announced that it would hire more than 6,000 young people currently unemployed in Kasserine, a central Tunisian city that has seen clashes between police and protesters in recent days. The Tunisian government has also pledged to launch labour-intensive construction projects.

Speaking to FRANCE 24, Essid said his government needed time to tackle the economic problems. “We do not have a magic wand to give a job to everyone at the same time,” said Essid. “What is happening in Tunisia with the youth is not new. We inherited this situation … We need people to be patient.”