Monster blizzard starts dumping snow on eastern and southern US 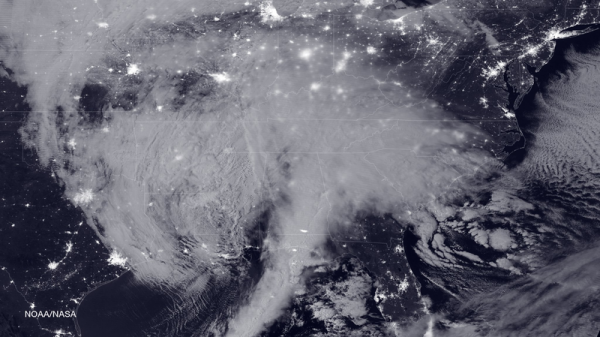 The National Weather Service said the winter storm could rank near the top 10 to ever hit the region. NWS meteorologist Paul Kocin compared it to “Snowmageddon,” the first of two storms that “wiped out” Washington in 2010, but he said the weekend timing could help limit deaths and damage.

“It does have the potential to be an extremely dangerous storm that can affect more than 50 million people,” said Louis Uccellini, director of the weather service. The snowfall, expected to continue from late Friday into Sunday, could easily cause more than $1 billion in damage and paralyze the eastern third of the nation, he said.

Uccellini said all the elements have come together to create a blizzard with brutally high winds, dangerous inland flooding, white-out conditions and even the possibility of thunder snow, when lightning strikes through a snowstorm.

Snowfall as heavy as 1 to 3 inches (2.5 to 7.6 centimeters) an hour could continue for 24 hours or more, Kocin said. In addition to Washington, 12 to 18 inches of snow was predicted for Philadelphia and 8 to 12 inches for New York.

A state of emergency was declared in Tennessee, North Carolina, Virginia, Maryland, Pennsylvania, the District of Columbia and parts of other states. Blizzard warnings or watches were in effect along the storm’s path, from Arkansas through Tennessee and Kentucky to the mid-Atlantic states and as far north as New York.

Schools and government offices were closed, thousands of flights were canceled and millions of people stocked up on supplies. College basketball games and concerts in the region were postponed.

All major airlines have issued waivers for travel over the weekend, allowing passengers to rebook onto earlier or later flights to avoid the storms. Flight tracking service FlightAware said airlines canceled more than 2,400 flights Friday to, from or within the U.S., and another 2,400 were canceled for Saturday. By Sunday afternoon, airlines hope to be back to full schedule.

Washington’s subway system said it will shut down entirely late Friday night and remain closed through Sunday. About 1,000 track workers will be deployed to keep New York City’s subway system moving and 79 trains will have “scraper shoes” to reduce the icing on the rails.

The federal government announced that its offices would be closing at noon Friday. White House spokesman Josh Earnest said President Barack Obama would hunker down at the White House.

The U.S. Capitol Police said sledding on Capitol Hill, which only recently became legal after an act of Congress, would be welcome for the first time in decades, as long as conditions are safe.

On Thursday, icy conditions caused accidents that killed two drivers in North Carolina and one in Tennessee. A truck with a snowplow killed a pedestrian in Maryland.

At a supermarket in Baltimore, Sharon Brewington stocked her cart, remembering that in the massive snowstorm of 2010, she and her daughter were stuck at home with nothing but noodles and water.

“I’m not going to make that mistake again,” she said.