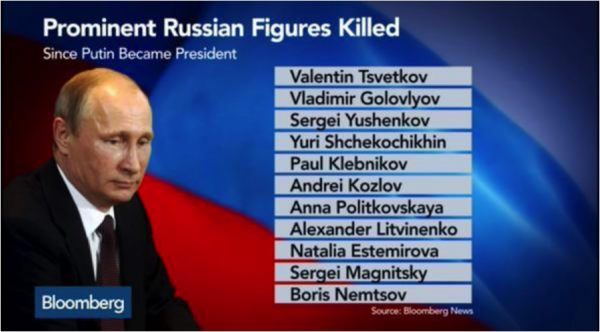 The findings — nearly a decade after Alexander Litvinenko succumbed to the effects of the radioactive polonium slipped into his cup of green tea at London’s Millennium Hotel — are sure to raise tensions between London and Moscow and possibly sharpen the focus on other suspicious deaths among Putin’s foes.

Theresa May, Britain’s home secretary, announced from the floor of the House of Commons that Britain would summon the Russian ambassador to express “profound displeasure” over Russia’s “blatant and unacceptable breach of the most fundamental tenets of international law.”

She said more serious consequences would be studied. Opposition lawmakers criticized her for a meek response that did not reflect the gravity of apparent state-sponsored assassination on British soil.

The Kremlin quickly dismissed the report, with a spokesman saying it would “further poison the atmosphere of our relations.”

Litvinenko’s widow called Thursday for Britain to expel Russian intelligence officials and enact new sanctions in retaliation for the killing of her husband, an outspoken critic of Putin.

The inquiry’s findings come at a highly sensitive time, as the West seeks Russian cooperation in ending the Syrian war. The British government, meanwhile, may not want to add fresh hostility to an already troubled relationship.

The inquiry found that two men deliberately poisoned Litvinenko, and were almost certainly working on behalf of the Russian intelligence agency FSB. The two named assassins, Andrei Lugovoi and Dimitry Kovtun, remain in Russia, and the Russian government has rebuffed British attempts to secure their extradition.

Lugovoi, a former KGB officer, is now a member of the Russian parliament. On Thursday he called the allegations against him “absurd.”

“These are lies, total lies, nonsense,” he told the Ekho Moskvy radio station.

Kovtun, now a businessman, described the charges as based on “falsified and fabricated evidence,” the Interfax news agency reported.

The inquiry’s findings, set out over 328 pages, include that Putin had a personal motive for wanting Litvinenko dead, and that the president would likely have had to approve a high-stakes operation to assassinate the former KGB operative on British soil.

The assassination has been described by a British Parliamentary committee as “a miniature nuclear attack on the streets of London.”

In Moscow, a spokesman for Putin, Dmitry Peskov, said that “such quasi-investigations, as we have today, can only further poison the atmosphere of our relations.”

Before his death, Litvinenko had been assisting Spanish intelligence agencies with their investigations into Russian crime networks. Litvinenko was also on the payroll of Britain’s main foreign intelligence service, MI6.

Litvinenko himself had accused Putin of orchestrating the assassination, signing a death-bed statement that alleged the Russian president had ordered Russian intelligence to carry out the killing. Before the poisoning, Litvinenko had publicly accused Putin of everything from corruption to pedophilia.

The findings follow an extensive, multi-year review that was led by British high court judge Robert Owen, and was set up at the direction of the British government.

Although the inquiry stops short of conclusively blaming Putin — citing the opaque nature of Kremlin politics — it concludes that there is “strong circumstantial evidence that the Russian State was responsible for Mr. Litvinenko’s death.” And it finds that the operation would likely not have gone ahead without Putin’s direct approval.

“The FSB operation to kill Mr. Litvinenko was probably approved by Mr. [Nikolai] Patrushev [then head of the FSB] and also by President Putin,” the report states.

Litvinenko was a British citizen at the time of his death, and had spent years on the payroll of MI6, following his decision to defect from Russia in 2000.

Following the report’s release, Marina Litvinenko, the defectors, called on British Prime Minister David Cameron to expel Russian intelligence officials from Britain and for Russia to be slapped with new economic sanctions.

“I am of course very pleased that the words my husband spoke on his deathbed — when he accused Mr. Putin of his murder — have been proved true,” she said, speaking to reporters outside of the Royal Courts of Justice in central London.

Alex Goldfarb, a friend of Litvinenko and author of “Death of a Dissident,” a book about the case, told the BBC: “I think it’s a very proper and fair finding because nobody in the Russian hierarchy would dare to order such a murder without Mr. Putin’s approval.”

The Liberal Democrats, Cameron’s former coalition partner, backed Litvinenko’s widow’s call for travel bans and economic sanctions for those involved in his death.

Party leader Tim Farron said: “A U.K. citizen was killed on the streets of London with polonium. It was an attack on the heart of Britain, our values and our society. I call for EU travel bans, asset freezes and coordinated action to deal with those who committed this evil assassination.”

But Tony Brenton, the British ambassador to Russia at the time of Litvinenko’s poisoning, said that while the British government should react “quite strongly” to the murder of a British citizen in Britain, “tearing up relations with Russia is almost certainly not in our national interest.”

He told BBC Radio 4’s Today program: “We have quite important other fish to fry with the Russians. They are very important in carrying the Iran de-nuclearization through, they are absolutely crucial in sorting out the mess in Syria.”

Even with the new findings, the suspected assassins — Lugovoi and Kovtun — are almost certainly not to be extradited. Russia does not extradite its citizens, and Lugovoi has been rewarded in the years since the Litvinenko killing with a seat in parliament.

The lawyer for Litvinenko’s widow, Ben Emmerson, said he did not believe there was any chance of the two men standing trial until “the final fall of Vladimir Putin.”

Britain on Thursday announced it had seized the assets of Lugovoi and Kovtun, although that was believed to be a largely symbolic gesture.

May, the Home Secretary, deflected suggestions Thursday that Britain should take stronger action.

The government, she said, had enacted sanctions and expelled officials years ago, when preliminary investigations revealed Russian authorities’ likely involvement in the killings. “It is in no sense business as usual” between the Britain and Russia, she said, adding that the prime minister, David Cameron, would discuss the matter with Putin “at the next available opportunity.”

Andy Burnham, a spokesman for the opposition Labour Party on home affairs, accused the government of “pulling its punches,” and suggested a more far-reaching response — such as a travel ban modeled after the U.S. Magnitsky Act — was needed.

Lugovoi and Kovtun had long been suspected of carrying out the murder.

But Thursday’s report lays out a comprehensive case linking them to the killing. According to the report, the two men lured Litvinenko to the Pine Bar at the Millennium Hotel on Nov. 1, 2006, and served him a cup of green tea laced with a massive dose of the radioactive substance polonium 210.

Traces of the isotope were later found in many of the same places where the two alleged killers had visited: The hotel’s bathroom, their hotel room, a board room where they conducted an earlier meeting and the plane they traveled aboard.

The report conclusively rules out suggestions that Litvinenko deliberately poisoned himself, or that he was poisoned by others.

“The scientific evidence,” said Owen, the judge, at a Thursday press conference, “demonstrates conclusively that Alexander Litvinenko was poisoned by Andrei Lugovoi and Dimitry Kovtun.”

But Owen said the two killers had no “personal reason” to kill Litvinenko. “All the evidence points in one direction, namely that when they killed Mr. Litvinenko, they were acting on behalf of someone else.”

Litvinenko became seriously ill later on the night of the 1st, which was the sixth anniversary of his arrival in Britain. He suffered massive internal organ failure, and died at a London hospital 22 days later.

The report compared the Litvinenko killing and other murders of Kremlin critics.

Just weeks before Litvinenko was poisoned, the journalist Anna Politkovskaya, his friend and sometime collaborator in investigating shady Russian government dealings, was gunned down outside her Moscow apartment. The Kremlin or its allies have long been suspected in the killing.