Iraqi security forces in Baghdad searching for 3 missing US citizens 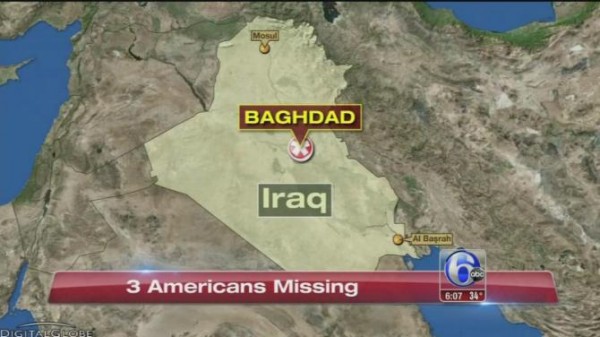 Security forces in Baghdad were hunting for three U.S. citizens who Iraqi lawmakers said on Monday had been kidnapped, which, if confirmed, would make them the first Americans abducted in the country since U.S. troops withdrew in 2011.

Unknown gunmen seized the trio from a private apartment on Friday in the capital’s southeastern Dora district, said Mohammed al-Karbouli, who sits on parliament’s security and defense panel. It was not immediately clear if their motives were political or criminal.

Iskandar Witwit, deputy head of the same panel, gave a similar account citing senior security officials who said the civilians had been taken from the district’s Sihha residential complex.

Iranian-backed Shi’ite Muslim militia fighters, seen as a bulwark in the fight against Islamic State militants, have a heavy presence in that part of the predominately Sunni district.

Dora was a bastion of the insurgency against the 2003 U.S.-led invasion that toppled Saddam Hussein and the site of intense sectarian bloodletting that peaked around 2006-07. Federal police now run most checkpoints there.

The capital of Iraq, OPEC’s second biggest oil exporter, has seen a proliferation in recent years of well-armed criminal gangs that carry out contract killings, kidnappings and extortion.

The U.S. State Department said on Sunday it was working with Iraqi authorities to locate Americans reported missing, without confirming they had been kidnapped.

The Iraqi government has struggled to rein in the Shi’ite militias, many of which fought the U.S. military following the 2003 invasion and have previously been accused of killing and abducting American nationals.

Iraq has seen a series of abductions of foreign nationals in recent months. At least 26 Qatari hunters kidnapped last month in the southern desert by unknown militants have not yet been found.

In September, 18 Turks taken in Baghdad by an armed group that used a Shi’ite Muslim slogan were released following several weeks in detention.