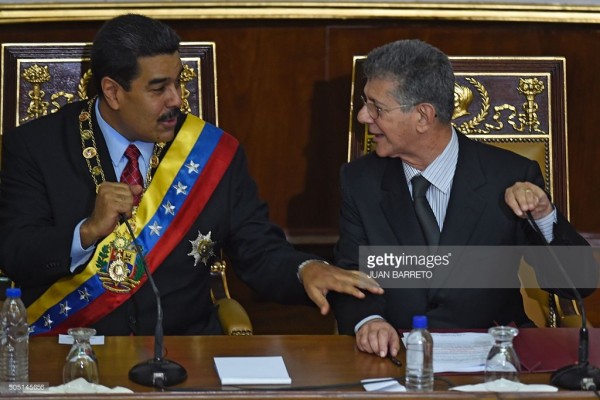 Venezuela’s central bank published economic statistics for the first time in a year, confirming the country had plunged deeper into recession and that inflation had spiraled into triple digits.

The inflation rate ended the third quarter at 141.5 percent, the central bank said, compared with 68.5 percent the last time they reported the number in December, 2014. Gross domestic product fell 7.1 percent in the third quarter from the year earlier.

The central bank laid blame for the economy’s plight upon collapsing oil prices — Venezuela’s only significant export — and an “economic war” it alleged was being waged against the South American country. It also accused websites that track the street value of the dollar of “destroying prices” and installing a “savage” form of capitalism in the country, adding that 60 percent of inflation was the result of currency manipulation.

The central bank’s report was published just moments after the country’s newly appointed economy czar, Luis Salas, read an emergency decree signed by President Nicolas Maduro that would grant him powers to dictate economic measures. The powers were needed to protect Venezuela from “speculation” and “fictitious” pricing, he said.

The measure, which must be approved by lawmakers, is likely to further heighten tensions ahead of Maduro’s first address to the National Assembly since the opposition won a landslide victory in congressional elections in December.

Discontent over spiraling prices and widespread shortages of everything from milk to cancer medicines helped the opposition wrest control of congress for the first time in 16 years. Maduro has maintained that his country’s economic woes are the result of a campaign waged by his rivals to oust his socialist government.

Salas did not mention devaluation, altering the country’s byzantine three-tired currency regime or address Venezuela’s debt payment policies. The decree is to be handed to congress for debate within eight days of its publication.

“This is mainly a political tool to put pressure on the opposition and try to share the cost of the crisis,” said Barclays Plc economist Alejandro Arreaza in an e-mailed response to questions.

Many analysts say that the plunge in oil prices will force the beleaguered president to take painful measuring such as adjusting currency controls or raising gasoline prices. On Friday, Venezuela’s oil basket fell to a 13-year low.

“The key question is whether the government will announce a moratorium on debt payments,” Bank of America wrote in research note to clients Friday. “With Venezuelan oil having fallen to $24, the stress on government finances is large enough to strengthen the case for a debt restructuring.”