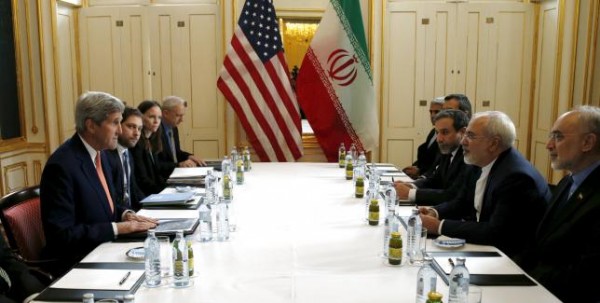 U.S. Secretary of State John Kerry (L) meets with Iranian Foreign Minister Mohammad Javad Zarif on what is expected to be “implementation day,” the day the International Atomic Energy Agency (IAEA) verifies that Iran has met all conditions under the nuclear deal, in Vienna January 16, 2016. REUTERS/Kevin Lamarque
Share:

Iran freed four Americans including a Washington Post reporter on Saturday in a prisoner swap, as diplomats gathered to announce the lifting of international sanctions and bring the country of 80 million people back to the global economic stage.

The International Atomic Energy Agency was expected to announce in Vienna that Tehran had complied with the requirements of a deal reached last year, under which it was to curb its nuclear program in return for the lifting of sanctions imposed by the United States, United Nations and European Union.

Iranian Foreign Minister Javad Zarif and U.S. Secretary of State John Kerry, who developed a strong rapport while hammering out last year’s deal, met in a Vienna hotel before the announcement.

“Implementation day” of the nuclear deal marks the biggest re-entry of a former pariah state into world commerce since the end of the Cold War.

It is also a turning point in the hostility between Iran and the United States that has shaped the Middle East since Iran’s Islamic Revolution of 1979, and a defining initiative for both U.S. President Barack Obama and Iranian President Hassan Rouhani.

Both leaders have faced strong opposition from hardliners at home in countries that have called each other “Great Satan” and part of the “axis of evil”.

“Today, with the release of the IAEA chief’s report, the nuclear deal will be implemented, after which a joint statement will be made to announce the beginning of the deal,” Zarif was quoted as saying in Vienna by state news agency IRNA.

“Today is a good day for the Iranian people as sanctions will be lifted today,” the ISNA agency quoted him as saying.

The sanctions have cut Iran off from the global financial system, drastically reduced the exports of a major oil producer and imposed severe economic hardship on ordinary Iranians. Most will be lifted immediately.

The four held in Iran include Washington Post bureau chief Jason Rezaian, held since 2014 and convicted in Iran of espionage. His case in particular has been a notable obstacle to a thaw in Iranian-U.S. relations.

Even before the expected announcement that sanctions would be lifted, Iran’s Mehr news agency reported on Saturday that executives from two of the world’s largest oil companies, Shell and Total, had arrived in Tehran for talks with state firms.

Under the deal, Iran has agreed to forego enrichment of uranium, which world powers feared could be used to make a nuclear weapon. Once sanctions are lifted, Iran plans to swiftly ramp up its exports of oil. Global companies that have been barred from doing business there will be able to exploit a market hungry for everything from automobiles to airplane parts.

Iran’s expected return to an already glutted market is one of the main factors contributing to a global rout in oil prices, which fell below $30 a barrel this week for the first time in 12 years. Tehran says it could boost exports by 500,000 barrels per day within weeks and 500,000 more within a year, in a world already producing 1.5 million barrels a day more than it consumes and running out of storage space to hold it.

The deal is opposed by all of the Republican candidates vying to succeed Obama as president in an election in November, and is viewed with deep suspicion by U.S. allies in the Middle East including Israel and Saudi Arabia.

It is supported by Washington’s European allies, who joined Obama earlier in his presidency in making sanctions far tighter as part of a joint strategy to force Tehran to negotiate.

The Obama administration says the deal reached last July offered the best possible prospect of ensuring that Iran would not develop a nuclear weapon, and could never have been achieved without the support of allies, which was always contingent on a pledge to lift sanctions once Iran complied.

For Iran, it marks a crowning achievement for Rouhani, a pragmatic cleric elected in 2013 in a landslide on a promise to reduce Iran’s international isolation. He was granted the authority to negotiate the deal by Supreme Leader Ayatollah Ali Khamenei, an arch-conservative in power since 1989.

Zarif, a U.S.-educated fluent English speaker, has emerged as the cheerful face of Iran’s diplomacy, developing a close rapport with Kerry in unprecedented one-on-one talks. Zarif has chipped away at Iran’s image as a pariah state, to the dismay of hardliners in Tehran as well as regional rivals.

“There are some people who see peace as a threat, who were always against (the nuclear deal) and will continue to oppose it,” he was quoted as saying by ISNA.

The prospect of Iran’s emergence from isolation could overturn the geopolitical balance of the Middle East. Iran is the pre-eminent Shi’ite Muslim power and its allies are fighting proxy wars in Iraq, Syria and Yemen against allies of its main Sunni Muslim regional rival, Saudi Arabia.

In Iraq, Tehran has found itself on the same side as the United States, supporting a Shi’ite-led government against the Sunni militants of Islamic State, also known as ISIS or ISIL.

Zarif has argued, including in a New York Times op-ed column last week, that Iran wants to help the global fight against Sunni Muslim militants, who he said are spurred on by policies adopted by Saudi Arabia.

“It’s now time for all — especially Muslim nations — to join hands and rid the world of violent extremism. Iran is ready,” Zarif tweeted on Saturday.

Iran has tested missiles since the nuclear agreement, drawing threats from Washington to tighten those sanctions. A week ago Iran detained 10 U.S. sailors on two boats in the Gulf, although they were released the next day after Tehran said it had concluded they had entered its waters by mistake.