Oil plunges below $29 on prospects of more Iranian crude

World oil prices slumped more than 6 percent to below $29 a barrel on Friday, as a further fall in the Chinese stock market and the prospect of an imminent rise in Iran’s crude exports deepened fears of a longer supply glut.

After closing higher for the first time in eight sessions on Thursday, U.S. and Brent crude futures slumped to new 12-year lows, taking this year’s losses to more than 20 percent, the worst two-week decline since the 2008 financial crisis.

The slump was not over yet, some analysts warned, as the lifting of sanctions on Iran opens the door to a wave of new oil. The International Atomic Energy Agency (IAEA) is expected later on Friday in Vienna to issue its report on Iran’s compliance with an agreement to curb its nuclear program, potentially triggering the lifting of Western sanctions.

Shares in China, the world’s No. 2 oil consumer, tumbled on Friday, with the Shanghai index ending down 3.5 percent to its lowest close since December 2014 and the yuan weakening sharply offshore. Adding to fuel demand concerns, U.S. data showed retail sales fell and industrial production weakened in December.

The “ongoing worries regarding the pace of economic growth” spurred a new round of selling in the oil market, said Tim Evans, energy futures specialist at Citi Futures.

Even before Iran’s sanctions are lifted, Iran’s oil exports were on target to hit a nine-month high in January. Tehran is expected to target India, Asia’s fastest-growing major oil market, as well as its old partners in Europe with increased exports once sanctions are lifted. 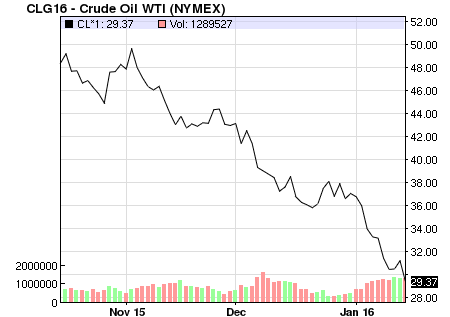 Despite oil prices hovering around new multi-year lows, analysts say that prices have not hit the bottom just yet, with demand likely to ease in coming weeks, especially with refiners beginning to shut for routine spring maintenance.

A further fall in prices “cannot be excluded”, said Commerzbank analyst Carsten Fritsch told Reuters Global Oil Forum. He warned that $25 a barrel “is quite possible, but not much lower than that.”

The oil price collapse has hammered currencies from commodity-producing nations and spooked financial markets as investors worry about the health of the global economy.