U.S. imposes sanctions on a Hezbollah linked Lebanese man and his company 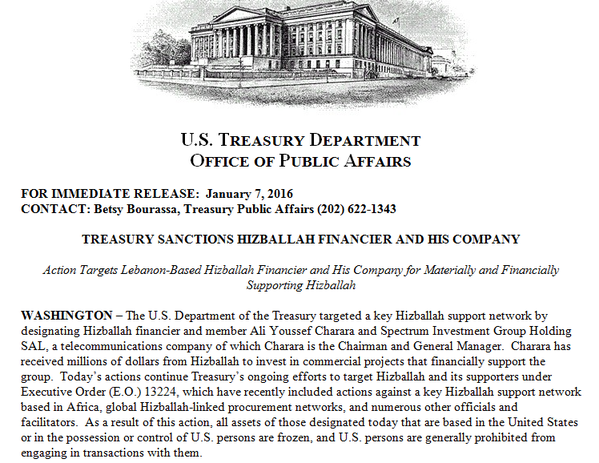 The U.S. action freezes assets of Charara and his company that are in the United States or in the control of Americans, and prohibits Americans from engaging in transactions with them.

The U.S. Treasury Department said Charara, chairman and general manager of Lebanon-based Spectrum Investment Group Holding SAL, has received millions of dollars from Hezbollah to invest in commercial projects that support the group.

Charara and Spectrum, which provides telecommunications services in the Middle East, Africa and Europe, could not be immediately reached for comment.

Hezbollah, the Shi’ite Islamist political and military group backed by Syria and Iran that wields considerable power in Lebanon, has long been designated as a terrorist organization by the United States.

“Hezbollah relies upon accomplices in the business community to place, manage and launder its terrorist funds,” said Adam Szubin, acting Treasury under secretary for terrorism and financial intelligence. “We are committed to exposing and disrupting these networks to pressure Hezbollah’s finances and degrade its ability to foment violence in Lebanon, Syria and across the region.”

Thursday’s designations were the first under a strengthened sanctions law passed last month, the Hezbollah International Financing Prevention Act of 2015.

Under the law, foreign institutions that process transactions for Hezbollah or entities linked to the group risk being barred from accessing the U.S. financial system.

“It not only means that American institutions can’t do business with those entities… but it also threatens to cut off anybody who continues to provide them services from the U.S. financial system,” said Matthew Levitt, a former Treasury official now at the Washington Institute for Near East Policy. “The more designations that come out, the more meat, the more power, the more strength it gives to the legislation.”

Similar so-called “secondary” sanctions against foreign companies doing business with Iran were used by the United States to prod Iran into making concessions on its nuclear program. The U.S. and other world powers reached a deal with Iran last year that would lift those sanctions in return for limits on the nuclear program.