The Syrian government has finally agreed to allow humanitarian assistance into three beleaguered villages following reports of deaths from malnutrition in that part of the country, a U.N. official said Thursday.

Meanwhile, the aid group Doctors Without Borders said 23 patients have died of starvation at an MSF-supported health center in one of the three villages since Dec. 1 – including six infants under 1 years of age and five adults over the age of 60.

A statement from Yacoub El Hillo, U.N.’s Resident and Humanitarian Coordinator in Syria, said aid will begin entering the villages in the coming days.

Two of the villages in question are the adjacent villages of Foua and Kfarya in the country’s north, which have been besieged by anti-government militants for more than a year. The third is the village of Madaya near the border with Lebanon, which has been under siege by government forces since early July.

“The UN welcomes today’s approval from the government of Syria to access Madaya, Foua and Kfarya and is preparing to deliver humanitarian assistance in the coming days,” said El Hillo.

Activists have said that several people have died over the past weeks in both areas because of malnutrition. There are currently some 30,000 people in the two Shiite villages and an even higher number in Madaya.

“Almost 42,000 people remaining in Madaya are at risk of further hunger and starvation,” El Hillo warned.

El Hillo said the U.N. is particularly concerned about the plight of nearly 400,000 people besieged by parties to the conflict in areas including the eastern city of Deir el-Zour as well as the Damascus suburbs known as eastern Ghoua.

“In the last year, only 10 percent of all requests for U.N. inter-agency convoys to hard-to-reach and besieged areas were approved and delivered,” the statement said.

He added that up to 4.5 million people in Syria live in hard-to-reach areas, including nearly 400,000 people in 15 besieged locations who do not have access to the life-saving aid they urgently need.

The conflict that began in March 2011 has killed more than 250,000 people and wounded more than a million. The crisis has also displaces half of Syria’s pre-war 23 million people. 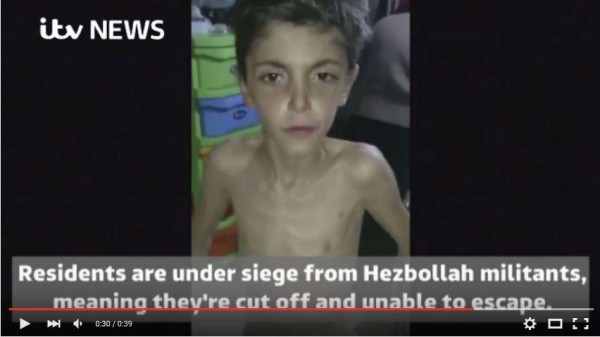 From Brussels, Doctors Without Borders also called for an immediate delivery of lifesaving medicine and medical evacuations, in addition to food supplies to Madaya, where it reported the 23 deaths from starvation.

After the last, single food delivery in October, the siege of the village had tightened into a complete stranglehold, MSF said.

“This is a clear example of the consequences of using siege as a military strategy,” de le Vingne added.