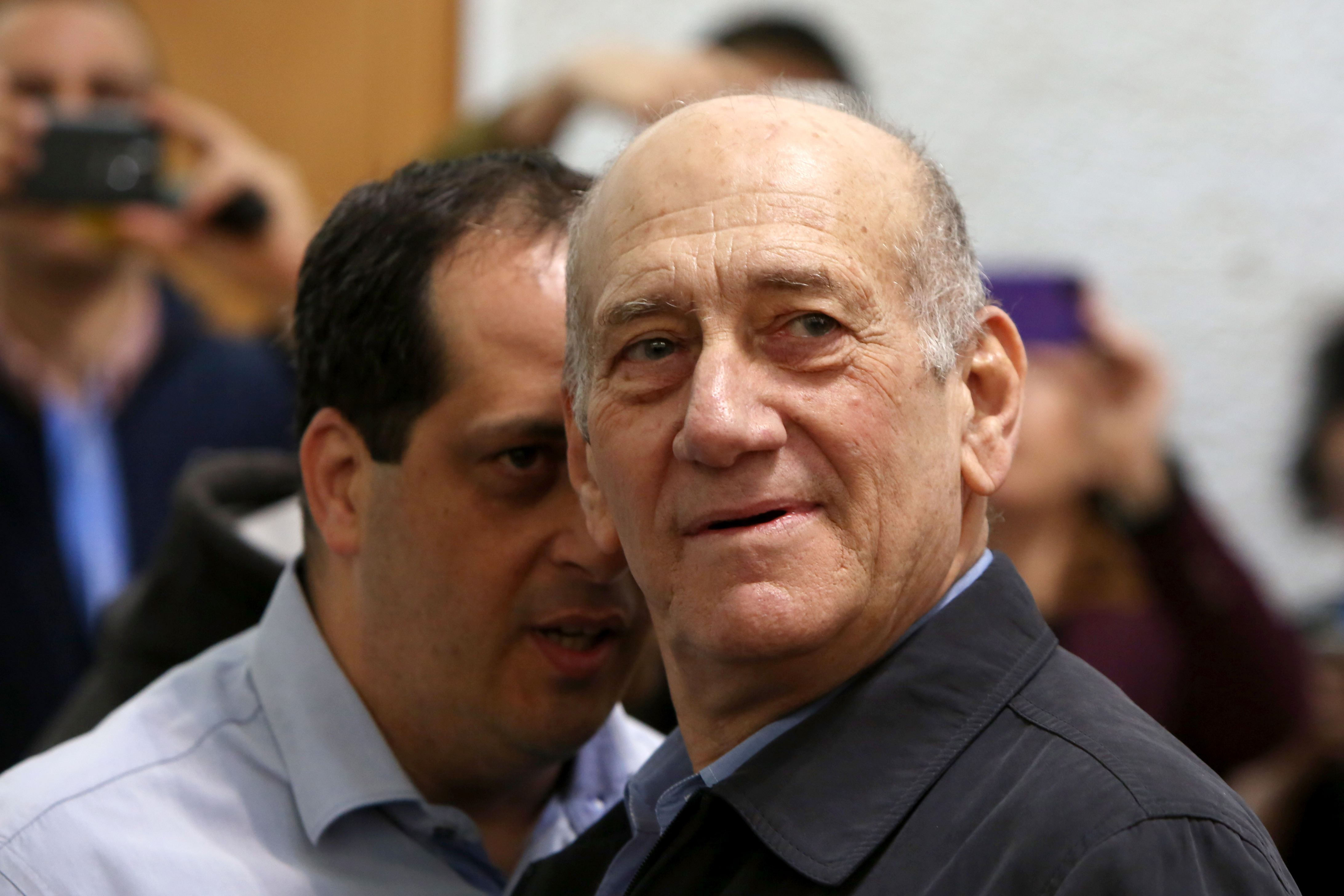 Former Israeli prime minister Ehud Olmert is seen in the court room as he waits for the judges at the Supreme Court in Jerusalem on Tuesday, Dec. 29, 2015. Israel’s Supreme Court reduced Olmert’s prison sentence for a sweeping bribery scandal from six years to 18 months, partially accepting his appeal and clearing the ex-premier of the main bribery charge against him. (Gali Tibbon/Pool Photo via AP)
Share:
Former prime minister Ehud Olmert was ordered Tuesday to serve jail time after Israel’s highest court upheld his conviction in one of the country’s biggest real estate corruption scandals.

Barring a surprise change, Olmert will be the first Israeli prime minister to spend time behind bars.

The court found him guilty in March 2014 of taking bribes from developers seeking to build a luxury apartment complex while he was the mayor of Jerusalem more than a decade ago.

On Tuesday, the court partially granted an appeal filed by Olmert, who served as prime minister from 2006 to 2009, reducing his sentence from six years to 18 months.

Olmert is one of eight officials and businessmen, including another former Jerusalem mayor, convicted in the case, which has become known as the Holyland affair for the complex that was subsequently built. He and some of the others found guilty are scheduled to begin their jail sentences on Feb. 15.

This is the second conviction for Olmert. He was also found guilty in 2014 of accepting campaign contributions from American Jewish businessman Morris Talansky in exchange for political favors while he was mayor. He received an eight-month sentence in that case but has yet to serve jail time.

Speaking to reporters after Tuesday’s decision, Olmert said he was relieved that his sentence was reduced but insisted he was innocent.

“It’s been a difficult few years for me and my family. There was a dark cloud hanging over me because of the Holyland affair. Now I feel like a heavy weight has been lifted,” he said. “I have said in the past and I say it again today: I never took any bribes, but still I respect the decision of the Supreme Court judges.”

The sentence for Uri Lupolianski, the other former Jerusalem mayor convicted in the case, also was reduced after he was acquitted of some of the bribery charges. He will do six months of community service.

Although Olmert is Israel’s first ex-prime minister to serve jail time, he is not the first high-level Israeli official to do so. He will join the country’s eighth president, Moshe Katsav, who is serving a seven-year sentence for rape and other sexual offenses.

Government minister Aryeh Deri of the ultra-Orthodox Shas party also spent time in prison in the early 2000s after being convicted of taking bribes while he was a cabinet member. He was released in 2002 and, after a long hiatus, returned to political life in 2013.

Over the past few weeks, Israel’s political landscape has been rocked by some fresh high-profile scandals.

Last week, after several women accused him of sexual assault, Interior Minister Silvan Shalom resigned. Shalom, ranked sixth in Prime Minister Benjamin Netanyahu’s Likud party, previously served in a variety of government positions and had been involved in politics for more than 20 years.

Less than a month ago, lawmaker and former television journalist Yinon Magal, a member of the ultra-nationalist Jewish Home party, also quit amid accusations of sexual harassment from former female colleagues.
WASHINGON POST