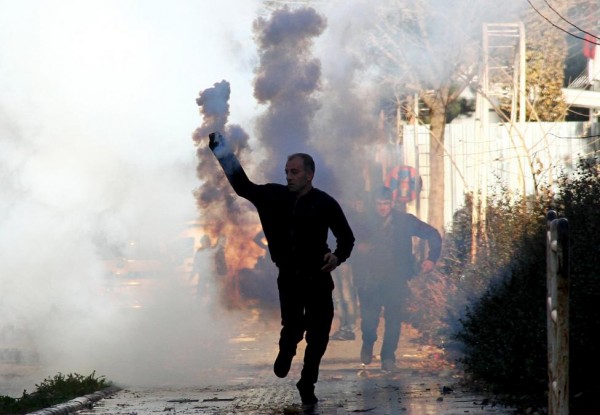 A Kurdish demonstrator throws a tear gas canister back at riot police during a protest against the curfew in Sur district in the southeastern city of Diyarbakir, Turkey, December 22, 2015. REUTERS/Sertac Kayar
Share:

Kurdish groups meeting in southeastern Turkey called for self-rule on Sunday amid heavy fighting in the region as the army pushed ahead with a security operation in which it says more than 200 Kurdish militants have been killed.

The Democratic People’s Congress (DTK), made up of Kurdish non-governmental organizations, made the call after a two-day meeting in Diyarbakir.

“The rightful resistance mounted by our people against the policies that degrade the Kurdish problem, is essentially a demand and struggle for local self-governance and local democracy,” said the final resolution of the meeting, titled “declaration of political resolution regarding self-rule”.

The declaration called for the formation of autonomous regions including several neighboring provinces of Diyarbakir to take account of cultural, economic and geographic affinities.

The call could escalate tensions between Kurds and the Turkish government as the government adamantly opposes a separate Kurdish state.

President Tayyip Erdogan said in a speech late on Saturday that Turkey would never allow the formation of another state within its borders.

“Now they are talking about separating our land in this country. With God’s permission, we will never allow a surgery on the unity of our country,” he said.

The army said in a statement on Saturday that more than 200 Kurdish militants had been killed over the last two weeks.

Television footage showed tank fire and explosions in Cizre, a town in the southeastern province of Sirnak, where a curfew has been in place for 13 days.

Three soldiers were killed in a bomb attack there by the Kurdish militant group PKK, the army said on Sunday.

Turkey has been alarmed by territorial gains by Kurds in Syria’s civil war, which it fears could stir separatism among its own Kurdish minority.

For the past three decades Ankara has been trying to end an insurgency by fighters of the Kurdistan Workers Party (PKK), which is classified as a terrorist organization by the United States and the European Union.

A two-year ceasefire between Kurdish militants and Ankara fell apart in July, plunging the southeast back into a three-decades-old conflict that has killed more than 40,000 people.

Leading labor unions and professional chambers in Turkey have called for a one-day strike on Tuesday to demand peace, in protest against government-led military operations in southeastern Anatolia.