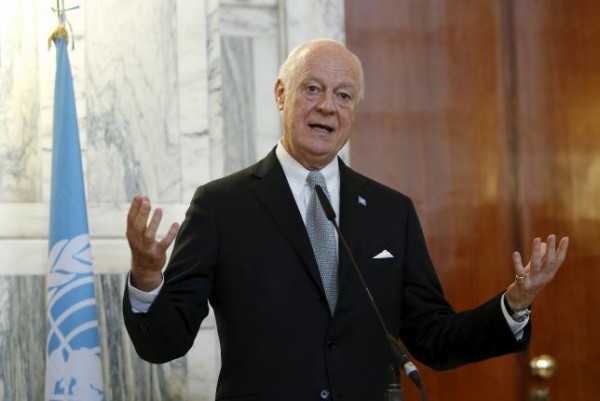 The United Nations said on Saturday it aims to bring together Syria’s warring parties on Jan. 25 in Geneva to begin talks to try to end nearly five years of civil war.

U.N. Syria mediator Staffan de Mistura plans to convene representatives of the Syrian government and “the broadest possible spectrum of the Syrian opposition and others,” his spokesman said in a statement.

“He counts on full cooperation of all the relevant Syrian parties in this process. Continuing developments on the ground should not be allowed to derail it,” said the statement, which was issued a day after Zahran Alloush, a top Syrian rebel leader, was killed in an air strike on the edge of Damascus.

The U.N. Security Council unanimously approved a resolution on Dec. 18 endorsing an international road map for a Syria peace process, in a rare show of unity among major powers.

It gave U.N. blessing to a plan negotiated previously by world powers in Vienna that calls for a ceasefire, talks between the Syrian government and opposition and a roughly two-year timeline to create a unity government and hold elections.

The resolution asked the United Nations to convene the peace talks with a target start date of early January.

Syria is ready to take part in peace talks in Geneva and hopes that the dialogue will help it form a national unity government, Syrian Foreign Minister Walid al-Moualem said on Thursday during a visit to Beijing.

Saudi Arabia hosted a conference earlier this month to try to create an opposition bloc. The summit agreed to set up a 34-member secretariat to supervise peace talks, and that committee will also select the opposition negotiating team.

The civil war was sparked by a Syrian government crackdown on a pro-democracy movement in early 2011. Islamic State militants have used the chaos to seize territory in Syria and Iraq, and some 4.3 million Syrians have fled the country.

“The people of Syria have suffered enough,” the U.N. statement said.

The Security Council resolution also called on Secretary-General Ban Ki-moon to draw up within a month options for monitoring a ceasefire in Syria.

The United Nations is mulling “light touch” options for monitoring a possible ceasefire in Syria that would keep its risks to a minimum by relying largely on Syrians already on the ground, diplomatic sources have said.