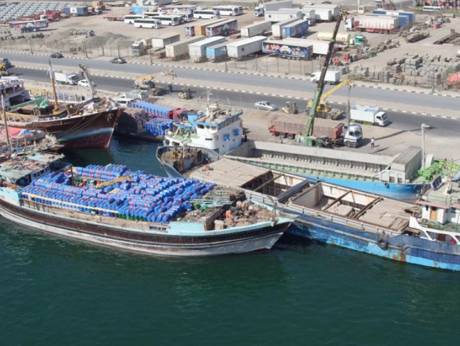 An Iranian ship smuggling in drugs and two people has been seized by the UAE’s Ministry of Interior.

The ship’s captain was attempting to smuggle in drugs and two people through Khalid port in Sharjah.

Colonel Saeed Al Suwaidi, director of the anti-narcotics department at the ministry, said 11.5kgs of hashish and 142,725 narcotic pills were hidden on the ship.

He added that 10 people on board the ship have been arrested, two of which were hidden in the ships’ ballast tank with the intention of smuggling them into the country.

Both of the men were suffering from fatigue and exhaustion due to a lack of oxygen and rising temperature.

He called upon the citizens and resident in the UAE to cooperate with the Anti-Narcotics Federal Directorate General and report drug dealers through ‘Mukafih’ phone service by calling the number 80044, or sending a text to 2244. He also urged parents to utilise the service provided by Mukafih including electronic awareness messages on the dangers of narcotics, early detection of drug abuse within the family, and providing help for addiction rehabilitation.

Lt. Colonel Ahmed Abdul Aziz, Acting Director of Anti-Narcotics Department at Sharjah Police said that the operation dates back to October 25, when the ship was suspected of carrying illegal cargo. Following a thorough search, it was discovered that the ship was carrying  11.5kg of hashish and 142,725 pills of narcotics hidden in cylinders and pumps for discharging automobiles’ oil.

“After interrogation, the captain of the ship confessed that the seized narcotics were being transported to a number of drug dealers with the aim of distributing them in the UAE as per the directions of a drug dealer in Iran. Hence, a number of teams were formed to arrest those dealers,” he said.

“We set up a number of ambushes to capture them red-handed while receiving the narcotics with the purpose of distributing them in the UAE. The operation resulted in capturing six of the most active drug dealers, bringing the total of convicts in the case to 16. They were referred to prosecution to be punished according the laws of the UAE. The ship was also seized pending the legal procedures,” he concluded.

Drug smuggling is a punishable offence in the UAE. The raid on the Iranian ship comes days after Dubai Police busted a drug smuggling operation in the emirate and seized about 1.5 tonnes of cocaine worth Dhs 1.5bn ( $400 million) . Local officials arrested two people in the operation, including its mastermind.

Sharjah is the northern neighbor sheikhdom of Dubai. The UAE is traditionally a close trading partner of the Islamic Republic of Iran and considered Iran’s gateway to global products.