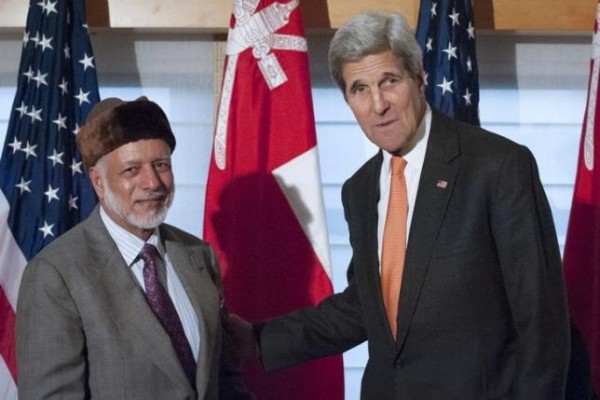 As the United States negotiated this year’s nuclear pact with Iran, the State Department quietly agreed to spare the Gulf sultanate of Oman from an embarrassing public rebuke over its human rights record, rewarding a close Arab ally that helped broker the historic deal.

In a highly unusual intervention, the department’s hierarchy overruled its own staff’s assessments of Oman’s deteriorating record on forced labor and human trafficking and inflated its ranking in a congressionally mandated report, U.S. officials told Reuters. The move, which followed protests by Oman, suggests the Obama administration placed diplomatic priorities over human rights to pacify an important Middle East partner.

In the weeks leading up to publication of the State Department’s influential annual Trafficking in Persons (TIP) report, top advisers to Secretary of State John Kerry disregarded findings by its Middle East diplomatic bureau and a U.S. government office set up to independently grade global efforts to fight human trafficking, the officials said.

In April, diplomats in the State Department’s Near Eastern Affairs bureau and experts in the Office to Monitor and Combat Trafficking in Persons agreed that Oman would be downgraded from “Tier 2” to a status known as “Tier 2 Watch List”, one notch above a level that can incur U.S. sanctions, according to an internal department memo seen by Reuters.

Oman, they agreed, had not done enough to improve the plight of migrant laborers and domestic workers who make up a large part of its expatriate community.

In June, when the final report is usually published, the advisers to Kerry took an unusual step. They put the entire 382-page document on hold, two sources with knowledge of the process told Reuters.

“Oman was the only hold-up,” said a State Department official, speaking on condition of anonymity.

In response to questions, a State Department official declined to directly address Reuters’ findings on the Oman TIP process, saying that the department sought to make the report “as accurate and objective as possible” for all countries.

The official said the United States speaks to Oman’s government on a variety of issues including trafficking, but declined to comment on “private diplomatic discussions” or on the recommendations by its trafficking experts and diplomats.

The TIP ranking, the official said, resulted from a “thorough, deliberative process” based on year-round efforts by U.S. embassies, foreign government officials, non-governmental and international organizations to gather information on human trafficking.

But the case of Oman illustrates how even a small country that is strategically significant to the United States can win concessions despite Washington’s public insistence that it bases its ranking system solely on human rights.

In its protests over the possible downgrade, Oman stressed its broader strategic importance to the United States, according to U.S. officials.

While it is not unusual for a country’s ranking to be contested between the State Department’s human rights analysts and political bureaus such as Near Eastern Affairs, high-level intervention to change a ranking after those two parties have agreed is extremely rare.

By the time this year’s TIP report was published on July 27, five weeks later than usual, Oman’s ranking had been maintained at “Tier 2”.

“I’m not aware of a case where something like this has happened before,” said Mark Lagon, the TIP office’s ambassador-at-large from 2007 to 2009 and now president of Freedom House, an advocacy group in Washington.

The reprieve has important implications. Watch List countries are defined as those where the absolute number of victims of severe forms of trafficking is “very significant or significantly increasing”, according to the State Department.

Without showing measurable progress, countries on the Watch List for two straight years are automatically downgraded to the lowest Tier 3, a rank that can trigger sanctions and is shared by some of the world’s worst abusers of human rights, including North Korea. Many countries lobby the State Department hard to avoid that designation or to prevent approaching that status.

A Western diplomatic source said he believes Kerry is “protecting Oman when it comes to this issue,” referring to human trafficking. “John Kerry has a good personal relationship with (Oman Foreign Minister) Yusuf bin Alawi and a good feeling towards Oman. So he doesn’t want to see Oman downgraded.”

Kerry’s press office declined to directly address whether he deliberately shielded Oman in the latest TIP report. A State Department official who took questions about Kerry’s role said the secretary made all the decisions on TIP rankings, including Oman’s, “based solely on the content of the report produced by State Department staff”.

“We stand by the integrity of the process,” the official said.

A Reuters investigation published on Aug. 3 revealed a high degree of “grade inflation” in this year’s rankings.

An unprecedented number of diplomatically sensitive countries such as Malaysia, China, Cuba, Uzbekistan and Mexico wound up with ratings higher than recommended by the State Department’s own human rights experts.

In the aftermath, lawmakers have questioned at congressional hearings whether this year’s report was politicized, an accusation the State Department denies.

Oman, a trusted U.S. ally in a strategic location at the toe of the Arabian Peninsula, prides itself as a stable presence and mediator in a region beset by conflict. The country of 4 million people has a “good neighbor” policy with Iran and close relations with the West.

Its ruler, Sultan Qaboos, orchestrated secret U.S.-Iran contacts that began in Muscat in 2012, leading to the first formal talks between the United States and Iran since the 1979 Islamic Revolution and helping to pave the way for July’s nuclear deal, a legacy-defining foreign-policy achievement for President Barack Obama.

Oman has also won U.S. favor in other ways, including helping to secure the release in 2011 of three American hikers held by Iran and taking in prisoners from the U.S. military prison at Guantanamo Bay in Cuba. In recent months, Muscat has also helped facilitate the release of American hostages held in Yemen and has assisted in Syria diplomacy.

But it has faced criticism by rights groups over its trafficking record. Many victims are from India, Pakistan and Bangladesh. Rights groups have reported complaints including unscrupulous recruiters, confiscation of passports by employers and physical abuse.

“The sultanate continues to work hard on TIP issues and we take this very seriously,” Badr Albusaidi, secretary-general of Oman’s Ministry of Foreign Affairs, told Reuters. “When problems are identified, for example a pattern of underage domestic servants coming from a particular country, we intervene actively.”

He added that Oman was constantly working on “improving hotlines, care centers, public information and education, and agency coordination.” He said if Oman were downgraded, it would be “unfair and unreasonable”.

Oman has protested its trafficking ranking in the past. When it was downgraded in 2008 to Tier 3, it demanded a retraction, suspending all contacts with the United States on human trafficking issues and threatening to reassess its relationship with Washington, according to diplomatic cables published by Wikileaks.

That impasse was resolved when Oman was given a special 60-day grace period to make specific improvements in its anti-trafficking activities and was then elevated to a higher tier.

U.S. embassy officials held a series of meetings beginning in December of last year with the Omani Foreign Ministry, giving the Omanis “a working paper” to shore up their anti-trafficking efforts, an Omani source close to the matter said.

The U.S. diplomats initially said they did not want to downgrade Oman because of “strong ties” but “they were not convinced that Oman was taking practical steps,” said the source.

In those meetings, the Omanis made their case not to be downgraded. The government in Muscat then asked its embassy in Washington to make “diplomatic attempts” to head off a downgrade, the Omani source said.

The final TIP report was handed down from the State Department building’s seventh floor, where Kerry and other top aides work, U.S. officials said.

It acknowledged Oman’s shortcomings in fighting human trafficking, saying Muscat had “decreased minimal anti-trafficking law enforcement efforts” and “made inadequate efforts to identify and protect victims” over the previous year.

The report also described Oman as a “destination and transit country for men and women, primarily from South Asia and East Africa, subjected to forced labor and, to a lesser extent sex trafficking.”

But it said Oman was making “significant efforts” to comply with minimum standards, even though its investigations of trafficking cases decreased to five from six the previous year and its sex trafficking convictions fell to two from five.

“We don’t  have sufficient capacity where people can seek recourse to assistance,” he said, citing issues such as workers fleeing their employers and a high suicide rate among expatriates.