Iran expects sanctions to be lifted soon, but more may be on the way after missile violation 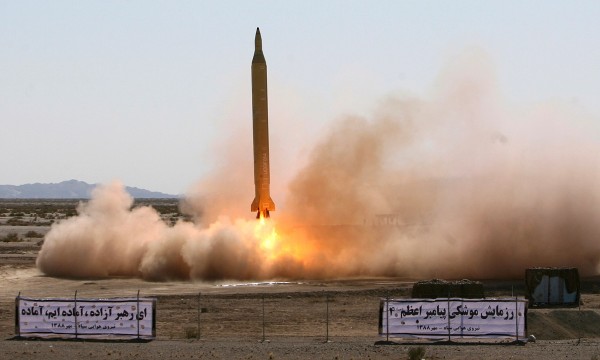 Iran violated a U.N. Security Council resolution in October by test-firing a missile capable of delivering a nuclear warhead, a team of sanctions monitors said, leading to calls in the U.S. Congress on Tuesday for more sanctions on Tehran.
Share:
President Hassan Rouhani said on Wednesday a U.N. watchdog’s closure of investigations into Iran’s past nuclear activities is a political victory for the country, lifting the main obstacle to implementing Tehran’s deal with world powers.

The 35-nation governing board of the International Atomic Energy Agency passed a resolution on Tuesday ending the IAEA’s 12-year-long inquiry into suspicions of “possible military dimensions” (PMD) to Iran’s nuclear work.

“Now the main obstacle to implement the (July nuclear deal between Iran and six powers) is lifted…, Iran will start implementation of the nuclear deal within two or three weeks,” Rouhani said in a speech broadcast live on state television.

Rouhani, a pragmatist whose election in 2013 led to a diplomatic thaw between the Islamic Republic and the West, voiced hope that sanctions on Iran would be removed in January, “delivering one of the electoral promises of the government”.

The IAEA issued a report this month strongly suggesting Iran engaged in coordinated activities aimed at developing a nuclear bomb up until 2003, though it found no credible sign of weapons-related work beyond 2009.

Despite the finding, the international response to the report has been muted, reflecting a wish to press ahead with an accord that allayed fears of a wider Middle East war over Iran’s nuclear ambitions, rather than dwell on its past actions.

The Tehran government on Dec. 7 rejected the findings of the report about its program before 2003, but declared that the document showed the peaceful nature of its atomic activities.

On Wednesday, however, a defiant note about Iran’s nuclear past was sounded by parliament speaker Ali Larijani, who was chief nuclear negotiator under Rouhani’s hardline predecessor.

“The U.N. Security Council sanctions were based on the claim that Iran was seeking nuclear weapons. Now they (IAEA) say Iran did some research on that. Such research and studies are the right of all IAEA members and there is nothing wrong with them,” Larijani was quoted as saying by the state news agency IRNA.

Iran has long denied having a nuclear weapons program as such. The Islamic Republic is a signatory to the nuclear Non-Proliferation Treaty (NPT), which bans the use of nuclear materials and know-how to develop atomic bombs.

Rouhani is hurrying to carry out Iran’s side of the deal so as to bring about the removal of sanctions hobbling its oil-based economy before the parliamentary election in February.

To that end, Iran is to reduce the number of installed uranium-enriching centrifuges to around 6,100 from 19,000. It must also remove the core of the Arak heavy-water reactor so that it cannot produce weapons-grade plutonium.

In a further move meant to reassure that Iran will not illicitly divert nuclear energy to bombmaking, much of its stockpile of enriched uranium is to be exchanged for a less refined form of uranium known as yellowcake.

“The yellowcake has arrived in the country and is now in city of Isfahan,” Ali Akbar Salehi, the head of Iran’s Atomic Energy Organization, was quoted as saying by the Fars news agency on Wednesday.

“Iran will ship its enriched uranium from Bushehr port to Russia within the next few days,” he added.

Only once the IAEA’s inspectors have verified that all the restrictions on Iran’s nuclear program are in effect will international sanctions be rescinded.

Iran, keen to export oil freely again once sanctions are dismantled, has repeatedly said that it has enriched uranium only to create an alternative source of electricity.

In a related development a team of sanctions monitors said Iran violated a U.N. Security Council resolution in October by test-firing a missile capable of delivering a nuclear warhead, leading to calls in the U.S. Congress on Tuesday for more sanctions on Tehran.

The White House said it would not rule out additional steps against Iran over the test of the medium-range Emad rocket.

The Security Council’s Panel of Experts on Iran said in a confidential report, first reported by Reuters, that the launch showed the rocket met its requirements for considering that a missile could deliver a nuclear weapon.

“On the basis of its analysis and findings the Panel concludes that Emad launch is a violation by Iran of paragraph 9 of Security Council resolution 1929,” the panel said.
REUTERS