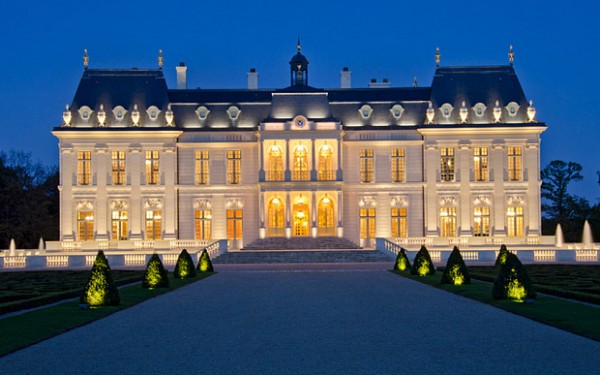 A vast mansion built from scratch in just three years outside Paris has become the world’s most expensive home after reportedly being sold for €275 million ($300 million).

Chateau Louis XIV, a 50,000 sq ft palace that Kim Kardashian considered as a potential wedding location in 2013, is said to have been purchased by a Middle Eastern buyer who requested anonymity.

Situated between Versailles and Marly-le-Roi, the 17th century-inspired home has indoor and outdoor pools, a private cinema, a squash court, two ballrooms and a nightclub.

There are 10 bedroom suites, a grand reception room with a 52ft-high frescoed dome ceiling, a library, a wine cellar with space for 3,000 bottles, and a “meditation room” under the moat circled by an aquarium with huge sturgeon inside.

The property, built on grounds that once housed the Swiss Guards ensuring the protection of Louis XIV, pays various tributes to France’s Sun King.

In the grounds of the 23-hectare estate is a 1.2 mile maze with a three quarter-sized replica of the Chateau de Versailles’ fountain of Apollo, whose statues are covered in gold leaf.

The façade has a genuine monumental bronze and enamel clock identical to the one on the façade of Versailles.

It is the work of Saudi developer Emad Khashoggi who employed 200 people to spend three years building the property on the outskirts of Paris.

The mansion was completed in 2011 after three intense years of building. “We did in three years what took 50 at Chateau Vaux-le-Vicomte,” one builder told Capital magazine. Much of the construction respected 17th century techniques.

It had been empty for three years awaiting a buyer.

Mr Khashoggi’s company, Cogemad, used 13 types of marble and 15,000 sheets of gold while it is thought there are 650ft of leather-embossed books on the shelves.

“With elegantly planted parterres, a gleaming gold-leafed fountain, an infinite array of flowers, marble statues, bridle paths and a hedged labyrinth, the property’s park and gardens evoke the genius of Le Notre, ” developer Cogemad said on its website, referring to the King Louis XIV’s gardener.

Security is high, with 40 state-of-the-art surveillance cameras which can be viewed from around the world via iPad as well as a hi-tech alarm system.

“The automated hi-tech controls are incorporated with the utmost discretion, blending invisibly with the interior’s breathtaking Grand Siècle décor,” said the website.

The astronomical sale was sealed by Christie’s International Realty, according to Bloomberg.

The €275 million price tag, which the agency said was confirmed by two sources, trumps the £140 million paid for a penthouse in One Hyde Park last year. There are homes in London that are more valuable, but they have not been sold in recent years.