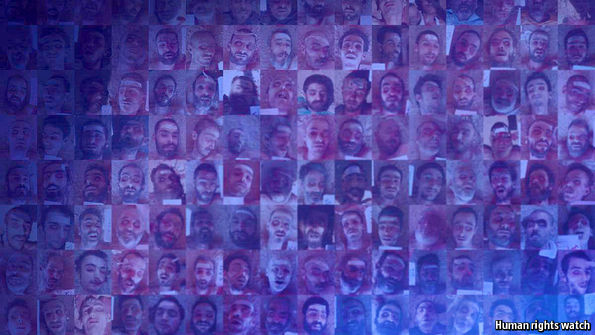 Nine months of research by Human Rights Watch has revealed some of the human stories behind the tens of thousands of photos of those who died in government custody that were smuggled out of Syria, the rights group said Wednesday.

In its 86-page report, “If the Dead Could Speak: Mass Deaths and Torture in Syria’s Detention Facilities”, Human Rights Watch (HRW) lays out new evidence of the authenticity of what are known as the Caesar photographs, some 28,000 photos smuggled out of Syria by a military defector codenamed Caesar that first came to public attention in January 2014.

The rights group said it had located and interviewed 33 relatives or friends of 27 victims whose cases its researchers had verified as well as 37 former detainees who saw people die in detention and four defectors, who either worked in a Syrian government detention centre or at the military hospitals where most of the photographs were taken.

“Just about every detainee in these photographs was someone’s beloved child, husband, father or friend, and his friends and family spent months or years searching for him,” said Nadim Houry, deputy Middle East director at Human Rights Watch, in a statement on the group’s website. “We have meticulously verified dozens of stories, and we are confident the Caesar photographs present authentic – and damning – evidence of crimes against humanity in Syria.”

The pictures appeared to show the bodies of some 6,000 Syrian detainees – often bearing marks of torture or starvation – who allegedly died in detention or after being transferred to military hospitals.

The watchdog said one of the victims, 14-year-old Ahmad al-Musalmani, died in government custody after being held for having an anti-regime song on his mobile phone in 2012.

Ahmad’s uncle, Dahi al-Musalmani, spent years trying to find his nephew as well as more than $14,000 in bribes to secure his release.

“I went directly to the folder of the Air Force Intelligence, and I found him,” he told HRW, breaking down while talking.

“It was a shock. Oh, it was the shock of my life to see him here. I looked for him, 950 days I looked for him. I counted each day. When his mother was dying, she told me: ‘I leave him under your protection.’ What protection could I give?”

HRW called on the countries holding peace talks on the Syrian war to prioritise the release of the thousands of detainees who remain in government custody. Diplomats from the United States, France, Britain, Germany, Italy, Saudi Arabia, the United Arab Emirates, Jordan, Qatar and Turkey met in Parison Monday to seek a solution to the crisis.

Human Rights Watch said that Russia and Iran – as the top backers of Syrian President Bashar al-Assad – have a “particular responsibility” to argue for international monitors to have immediate access to detention centres in Syria.

“The government registered these deaths, processing dozens of bodies at a time, while taking no action to investigate the cause of death or to prevent yet more people in their custody from dying,” Houry said.

“Those pushing for peace in Syria should ensure that these crimes stop and that the people who oversaw this system ultimately face accountability for their crimes.”