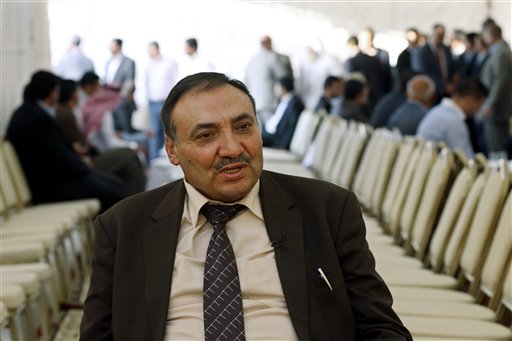 FILE– In this Oct. 4, 2015 file photo, Jordanian parliament member Mazen Dalaeen speaks during the traditional three-day mourning period for his 23-year-old son, Mohammed, who carried out a suicide attack in Iraq three months after dropping out of medical school and joining the extremist Islamic State group, in Amman, Jordan. After spending much of November 2015 working to bring back a young Jordanian girl attempting to join the group, the 25-year-old from Karak was eventually persuaded by Dalaeen — who earlier this year failed to extract his own son from the grip of IS recruiters — to return to Jordan. The lawmaker said the case illustrates the extremists reach deep into pro-Western Jordan. (AP Photo/Raad Adayleh, File)
Share:
A Jordanian woman who came close to joining the Islamic State group described a sophisticated 14-month recruitment process by the extremists that she said landed her in a secret IS compound in Turkey with dozens of other women.

The 25-year-old was eventually persuaded by Jordanian lawmaker Mazen Dalaeen — who earlier this year failed to extract his own son from the grip of IS recruiters — to return to her family.

The case highlights the systematic grooming of potential IS recruits through daily social media exchanges and follow-up on the ground for travel arrangements — in her case an envelop stuffed with cash for a plane ticket to Turkey, handed to her by a veiled woman in her home district of Karak in central Jordan.

The woman, jobless since earning a B.A. in psychology in 2011, said IS recruiters exploited her vulnerability. “They used my frustration … promising me a new life with a job and a house,” she said in a phone conversation with Dalaeen after her return to Jordan last month.

A recording of the call was given to The Associated Press by the lawmaker, a vocal campaigner against the Islamic State group, which controls large areas of Jordan’s neighbors Syria and Iraq in a self-declared “caliphate.”

The woman also described her experience in a Nov. 18 program on Jordan University’s radio station, with her speaking by phone. Dalaeen provided further details in an interview with AP on Thursday.

The lawmaker said the case illustrates the extremists’ deep reach into Jordan, an outspoken U.S. ally in a Western-Arab military coalition against IS.

“Daesh has a strong organization,” Dalaeen said, using the Arabic acronym for IS. “They can penetrate young people’s minds easily and change certain thoughts.”

Jordanian government officials have played down the extent of support for IS, saying any lingering public sympathies for the group vanished after it released a video in February that showed captured Jordanian fighter pilot Lt. Muath al-Kaseasbeh burning to death while trapped in a cage.

Observers say a strong undercurrent of discontent in Jordan creates tempting targets for IS recruiters. Like other countries in the region, Jordan struggles with high youth unemployment, including among university graduates, and there are few outlets for political dissent.

The Karak woman’s father, a retired army officer, said his daughter and other young people fell prey to IS because of high unemployment and nepotism. He spoke on condition of anonymity to conceal his daughter’s identity and turned down an AP request to interview her.

The story begins in Ai, the Karak district hometown of the woman, the pilot and the lawmaker.

Earlier this year, Dalaeen failed to foil the recruitment of his 23-year-old son Mohammed, who carried out a suicide attack on behalf of IS in Iraq in late September. The Karak woman’s family sought Dalaeen’s help after she sneaked off to Turkey in late October.

Dalaeen reached her on social media. He told her leaving home without her father’s permission and traveling without a male chaperone violated Islamic principles and that this should make her question claims that IS represents the true Islam.

After a week, the woman’s resolve to join IS weakened. But she was scared she would be imprisoned in Jordan or harmed for ostensibly staining the family honor. Dalaeen said he guaranteed a safe return.

At the time, she was living in a dormitory-style complex in Istanbul for about 50 women from the Arab world who were waiting to travel to IS-held areas, she said. “There was a very big screen in the dorm where we watched videos of killings and calls for killing anyone who doesn’t pray,” she told the radio show.

She told Dalaeen that IS was “moving women from place to place for security reasons,” gradually shifting them toward the Syrian border.

At one point, the Karak woman was able to evade the three female IS minders in her dorm and slip out, Dalaeen said.

A few hours later, while keeping in touch with Dalaeen, she met with Jordanian diplomats at a hotel in Istanbul. Dalaeen said she was questioned by Turkish intelligence before being put on a plane to Jordan.

After her return, details of her recruitment emerged.

The woman said that 14 months ago she was befriended on Facebook by a woman from Raqqa, the unofficial capital of the Islamic State group’s “caliphate” in Syria. They talked about religion and IS. Other IS supporters also contacted her.

Over the next few months, “they started sending me more than 200 videos full of killing and slaughtering,” she said. “Finally, I started enjoying (seeing) the killing.”

She said she received more than 500 messages urging her to travel to join IS. Recruiters also asked her “to kill my father or even my brother because they are infidels and soldiers in the Jordanian security forces,” she said.

Eventually, her contacts arranged a meeting in Karak with a veiled woman who spoke with a Jordanian accent and handed her an envelope with 350 dinars ($500) for travel expenses, she said.

Daleen said IS recruiters have been active in his district. Forty-five young men from the area are fighting for IS and three more young women were approached about joining, he said.

Experts say about 3,000 Jordanians have joined IS in Iraq and Syria and between 400 and 450 have been killed fighting for the group. Jordan has imprisoned dozens of suspected IS sympathizers.

“We know we will win against those brutal murderers because we are defending the values of merciful Islam and world civilizations,” government spokesman Mohammed Momani said.

Dalaeen believes IS must not be underestimated.

“Jordan, honestly, has been completely penetrated by this organization,” he said.