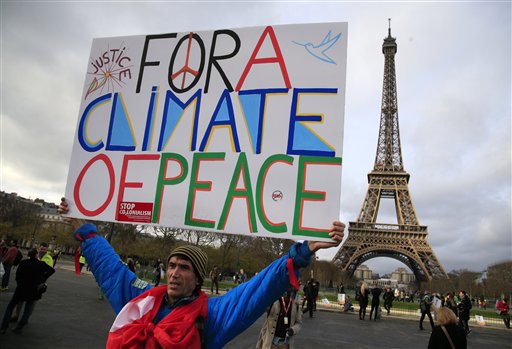 An activist hold a poster during a demonstration near the Eiffel Tower, in Paris, Saturday, Dec.12, 2015 during the COP21, the United Nations Climate Change Conference. As organizers of the Paris climate talks presented what they hope is a final draft of the accord, protesters from environmental and human rights groups gather to call attention to populations threatened by rising seas and increasing droughts and floods. (AP Photo/Thibault Camus)
Share:

U.N. climate talks reached a milestone Saturday when more than 190 countries adopted the first accord asking all countries to join the fight against global warming.

Here are some of the key elements of the deal:

—LONG-TERM GOAL: The long-term objective of the agreement is to make sure global warming stays “well below” 2 degrees Celsius (3.6 degrees Fahrenheit) and to “pursue efforts” to limit the temperature rise to 1.5 degrees Celsius (2.7 degrees Fahrenheit). Temperatures have already increased by about 1 degree Celsius (1.8 degrees Fahrenheit) since pre-industrial times. To achieve that goal, governments pledged to stop the rise in heat-trapping greenhouse gas emissions “as soon as possible.” By some point after 2050, the agreement says, man-made emissions should be reduced to a level that forests and oceans can absorb.

—EMISSIONS TARGETS: In order to reach the long-term goal, countries agreed to set national targets for reducing greenhouse gas emissions every five years. More than 180 countries have already submitted targets for the first cycle beginning in 2020. Only developed countries are expected to slash their emissions in absolute terms; developing nations are “encouraged” to do so as their capabilities evolve over time. Until then, they are expected only to rein in the growth of emissions as their economies develop.

—REVIEWING TARGETS: The initial targets won’t be enough to put the world on a path to meet the long-term temperature goal. So the agreement asks governments to review their targets in the next four years and see if they can “update” them. That doesn’t require governments to deepen their cuts. But the hope is that it will be possible for them to do so if renewable energy sources become more affordable and effective.

—TRANSPARENCY: There is no penalty for countries that miss their emissions targets. But the agreement has transparency rules to help encourage countries to actually do what they say they will do. That was one of the most difficult pieces to agree on, with China asking for softer requirements for developing countries. The agreement says all countries must report on their emissions and their efforts the reduce them. But it allows for some “flexibility” for developing countries that “need it.”

—MONEY: The agreement says wealthy countries should continue to offer financial support to help poor countries reduce their emissions and adapt to climate change. It also encourages other countries to pitch in on a voluntary basis. That paves the way for emerging economies such as China to contribute, even though it doesn’t require them to do so. Actual dollar amounts were kept out of the agreement itself, but wealthy nations had previously pledged to provide $100 billion annually in climate finance by 2020.

—LOSS AND DAMAGE: In a victory for small island nations threatened by rising seas, the agreement includes a section recognizing “loss and damage” associated with climate-related disasters. The U.S. long objected to addressing the issue in the agreement, worried that it would lead to claims of compensation for damage caused by extreme weather events. In the end, the issue was included, but a footnote specifically stated that loss and damage does not involve liability or compensation.