Pentagon: Russian — not U.S. — warplanes hit a Syrian army base 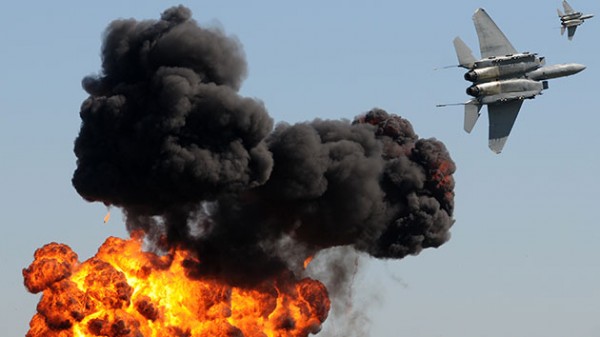 The U.S. military alleged Monday that Russian warplanes were responsible for an attack on a Syrian army position in eastern Syria, an airstrike that Syria blamed on the U.S.-led coalition battling the Islamic State militant group in the country.

The Syrian government issued an angry statement earlier in the day accusing coalition aircraft of carrying out the overnight attack in the eastern province of Deir al-Zour. The government said three Syrian soldiers were killed and 13 others injured in the strike.

It was the first such allegation by Syria since the U.S.-led air campaign against the Islamic State began in Syria 14 months ago, and it sent tensions soaring in Syria’s crowded skies.

A U.S. military official, speaking on the condition of anonymity because of the sensitivity of the issue, later said the Pentagon is “certain” that a Russian warplane was responsible for the attack. There was no immediate response to the charge from either Syria or Russia.

The finger-pointing illustrated the danger that a misunderstanding, mistake or misinformation could trigger a wider conflict as Russia and the United States lead separate, rival air campaigns to combat the Islamic State.

U.S. warplanes did conduct overnight strikes in the province of Deir al-Zour on Sunday, but the targets were oil wells at least 34 miles from Ayyash, the location the Syrian government said was hit, according to Col. Steve Warren, a U.S. military spokesman in Baghdad.

Syria’s Foreign Ministry called the alleged attack on the army post an act of “heinous aggression.” It said it sent letters of complaint to the U.N. secretary general and the U.N. Security Council, calling for the United Nations to take “urgent measures” to prevent a recurrence of such an incident.

“The aggression on the military post hinders the efforts aiming to fight terrorism and reiterates that the U.S.-led coalition lacks seriousness and credibility in the fight against terrorism,” the Foreign Ministry statement said.

In Moscow, Kremlin spokesman Dmitry Peskov said he could not confirm the information provided by the Syrian government.

Most of the province of Deir al-Zour is controlled by the Islamic State, but the Syrian government has held onto a portion of the city of Deir al-Zour throughout the four-year-old war.

British warplanes last week joined French and American aircraft in conducting strikes against the Islamic State in eastern Syria under the umbrella of the U.S.-led coalition.

Russian warplanes, meanwhile, have been striking targets across Syria since late September, alongside the Syrian air force — although the U.S. military says the Russian strikes mostly target opposition rebels and not the Islamic State.

Opposition activists said eight civilians were killed in a strike carried out Monday against the Sukkari neighborhood in the rebel-held northern city of Aleppo by either Russian or Syrian planes. The victims were among dozens of people reported killed around the country Monday.

Israel also occasionally carries out strikes against Syrian military facilities to prevent the transfer of weaponry to the Lebanese Shiite Hezbollah militia, and Turkey has conducted a handful of strikes against Islamic State militants.

So busy are the skies in some parts of the country that Syrians frequently do not know who is bombing them. An airstrike that killed 15 civilians over the weekend in Raqqa, the north-central city where the Islamic State is headquartered, was attributed to the U.S.-led coalition by the Britain-based Syrian Observatory for Human Rights.

But another activist group, Raqqa Is Being Slaughtered Silently, said the strike was carried out by Russian warplanes.

“It’s very confusing and hard to know” which airstrike is being carried out by which country “with all [these] warplanes and airstrikes above our heads,” the group said on its Twitter account.