The end of Turkey’s double game with Islamic State? 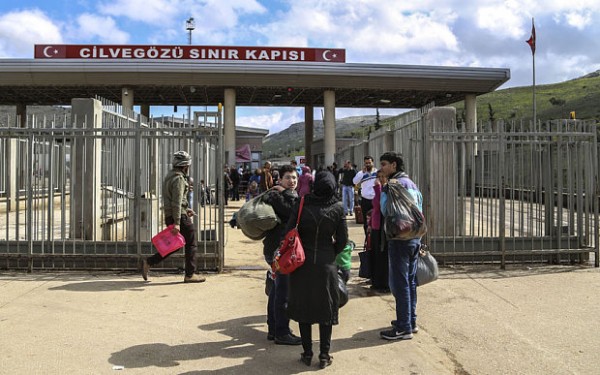 Syrians fleeing the Syrian civil war enter Turkey via Cilvegozu border crossing in Hatay’s Reyhanl district Turkey’s porous 560-mile border with Syria remains a key entry point for foreign fighters flocking to join the Islamic State’s self-declared caliphate.Photo: Getty Images/Anadolu Agency
Share:
For several years, the White House has watched with mounting frustration as Turkey—a supposed American ally in the fight against ISIS—has left a crucial portion of its southern border thinly guarded. Behind closed doors, U.S. officials have urged President Recep Tayyip Erdogan to do something to stop foreign fighters who fly into Istanbul, then slip across the border into Syria to replenish the ranks of the jihadist group. They also want Erdogan to block the trucks loaded with ammunition and explosives that rumble across the border and to crack down on Turkish middlemen taking part in the oil-smuggling trade—an operation that nets the self-declared caliphate roughly $1.5 million per day. All to no avail.

But in the wake of last month’s ISIS attacks in Paris, in which one of the attackers traveled from Syria to Europe through Turkey, the U.S. is now making its misgivings public, all but accusing the Turkish leader of playing a double game. “I have had repeated conversations with President Erdogan about the need to close the border between Turkey and Syria,” President Barack Obama said on December 1 in the French capital. “If you’ve got foreign fighters…returning to their home countries, they’re likely candidates for engaging in the kind of terrorist attacks that we saw here.”

U.S. ties with Turkey have long been troubled, going as far back as the 2003 Iraq War, when Ankara refused to allow U.S. troops to launch part of the invasion from Turkish territory. But with the rise of ISIS and the war in Syria, the relationship has worsened considerably. Turkish officials have repeatedly denied they support the jihadist group, despite allegations to the contrary: Roughly six months ago, a U.S. raid against ISIS in Syria reportedly produced documents that revealed strong links between Turkey and the Islamist militants in Raqqa. Either way, analysts say Ankara regards ISIS, along with other jihadist and rebel groups fighting in Syria, as a “useful enemy” in the war against its main adversaries—Syrian President Bashar al-Assad and Kurdish militants on the other side of the border. But because Turkey, with its close proximity to the Middle East, is such a critical NATO ally, the White House has been unable to get Erdogan to bend. “The fact that Turkey shares a 500-mile border with Syria, and is the NATO outpost closest to the conflict in Syria, is Erdogan’s get-out-of-jail card,” notes Steven Cook, a Middle East expert at the Council on Foreign Relations.

But now Obama may have some leverage. In late November, Turkey shot downa Russian warplane as the fighter jet bombed Ankara-backed rebels operating near the Turkish-Syrian border. In response, an angry Russian President Vladimir Putin banned Turkish agricultural imports, halted a $10 billion pipeline project to bring Russian gas into Europe through Turkey and demanded an apology from Ankara. Erdogan defended the shootdown and called an emergency meeting of NATO, where he reminded alliance partners of their treaty obligation to protect Turkey in case the confrontation escalates.

Though Obama has publicly affirmed U.S. support for Turkey, a U.S. official, speaking on condition of anonymity under administration rules, told Newsweek the shootdown has nevertheless heightened Ankara’s concerns about future Russian retaliation. As a result, the official said, “they’re looking to us to calm things down” between them.

Doing so won’t be easy. While a direct Russian military confrontation with Turkey appears unlikely, the strong-willed Putin appears in no mood for conciliation with Ankara. “They will regret what they did more than once,” Putin vowed in his December 3 state-of-the-nation speech at the Kremlin.

Some analysts believe Putin will exact his revenge on Erdogan in Syria, where the Turkish leader has been supporting Turkmen groups fighting to depose Assad in the hope that Ankara can exercise some influence in the country after the strongman’s demise. But as long as Putin props up Assad militarily, they say, there is little chance he will be completely pushed from power. So the only way Erdogan can have a say in the future of Syria is by securing a place at the negotiation table.

But Soner Cagaptay, a Turkey expert at the Washington Institute for Near Policy, notes Turkey’s seat at the table is assured only if its Turkmen proxies can maintain their hold on their territory in northwestern Syria. Yet since the shoot-down, Russian warplanes have stepped up their air strikes against those fighters. “Putin’s dream now is to drive these rebels out of Syria, a scenario that would mean complete defeat of Ankara’s Syria policy,” Cagaptay wrote for War on the Rocks, a website that focuses on national security issues. The more the Russians bomb, he adds, the more likely it is that another wave of refugees will flood into Turkey, adding to the estimated 2 million Syrians who already have fled across the border.

If the feud with Turkey persists, analysts say Putin also could provide arms to Kurdish militants in Syria to help them seize the 60-mile strip along the Turkish border that Obama has been complaining about. That would give the Syrian Kurds control of the entire border with Turkey—a nightmare scenario for Erdogan, who fears Turkey’s Kurds might join their brethren and form a breakaway state.

Erdogan has options, too. He could retaliate by closing off the Bosphorus, the narrow channel that separates Europe and Asia and provides Russia’s Black Sea fleet with its only outlet to the Mediterranean. He could even allow Muslim fighters from Turkey’s Chechen and North Caucasus communities to cross into Syria to fight the Russians as proxies.

But so long as the direction of Putin-Erdogan feud remains uncertain, the White House feels it can pressure its Turkish allies to better secure its border with Syria. U.S. officials say the administration now wants Turkey to deploy as many as 30,000 soldiers on its side of the border with Syria to plug the flow of fighters and oil once and for all.

Turkey seems to be listening. On December 3, Turkish Prime Minister Ahmet Davutoglu said Ankara would do everything it could to control the border with Syria, including building “physical barriers” to close it off. But he also cautioned critics not to expect quick results. Any border arrangement would have to allow for the transit of Syrian refugees, he said, adding ISIS fighters in the area also would try to breach the border. “There is nothing more difficult than protecting a border on the other side of which there is no political authority,” Davutoglu said. In what appeared to be a move to mollify the Americans, Ankara recently sent several hundred Turkish troops to northern Iraq to train Kurdish soldiers for an eventual counter-offensive to retake the city of Mosul from ISIS militants, who seized it in June 2014. “This is part of the fight against Daesh,” a senior Turkish official told Reuters on December 4, using the Arabic acronym for ISIS.

U.S. officials welcome Turkey’s contribution to the fight, but the Obama administration is still concerned about Turkey’s follow-through. After all, the last time Turkey made such a promise, it broke it: In July, after months of discussions, Erdogan and Obama agreed to a plan that called for U.S. and Turkish forces to bombard ISIS, paving the way for U.S.-backed Syrian rebels to seize control of the border strip. But Erdogan apparently had second thoughts, worried that removing ISIS would only benefit Turkey’s enemies—Assad, as well as the Syrian Kurds. Days later, Turkish intelligence reportedlytipped off Islamist rebels, allowing them to kidnap a group of U.S.-trained Syrian fighters only minutes after they entered the country. Not surprisingly, Ankara denies the report. But either way, administration officials say Turkey’s double game has continued.

The U.S. now hopes it has finally come to an end.