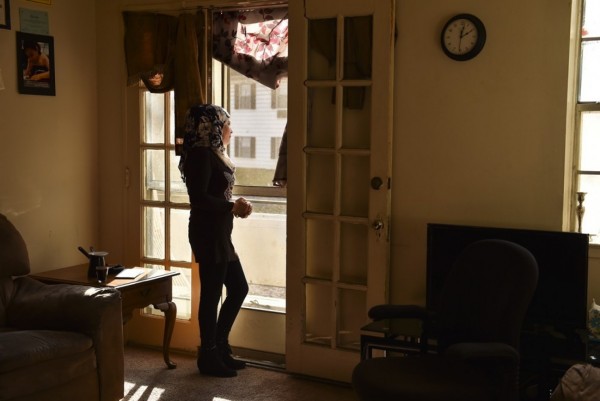 Linda J., a Syrian refugee, is photographed at her apartment on Dec. 3, 2015 in Baltimore, Md. (Photo by Ricky Carioti/ The Washington Post)
Share:

By Linda J.*
The best days of my life were in Syria. I was born and raised there. I married and reared my family in my country. My kids went to school, and my husband worked as a carpenter. I was a 29-year-old stay-at-home mom, and we owned furniture stores in Damascus. We shared everything with our neighbors and felt the love around our home. But in 2011, everything for my family and every family in Syria changed.

Peaceful protesters began asking for improvements from the government — basic things, fundamental rights. Among other things, they were calling for the release of political prisoners and for an end to the government’s corruption. My husband and I were not revolutionaries. We respected the role of the government in our lives, but we agreed that changes were needed and believed those changes could happen peacefully. Our family did not participate in the protests. We watched from our house.

The demonstrators were not terrorists. They didn’t carry weapons; they carried signs calling for a better life. I remember seeing people with olive branches and flowers, symbols of peace. So the government’s reaction came as a terrible surprise. Soldiers began using violence to silence the voice of the people, shooting them in the streets. A war between the people and the government had begun.

The government bombed the neighborhoods where the protests started, including ours. Tanks rolled through our streets, smashing cars and destroying property. Checkpoints popped up throughout the city; everyone passing through was questioned and had their IDs checked. The military came into homes and took the men, young and old, creating panic and fear. The government dispersed crowds by shooting into them at random; even bystanders were hit. My children and I were terrified. During this period, many people lost family members.

Some parents immediately pulled their children out of school, but education for my five daughters had always been our family’s focus. We drove them to school, and they walked home. Soon tanks controlled the cul de sac that led to their school, and they had to walk between them to leave.

One day, my 7-year-old came home petrified about something she had seen. She told me the soldiers had pulled random students and people from the street and lined them up on their hands and knees, in two rows, in front of the tanks. They were not allowed to move. The soldiers in the tanks threatened to run them over and taunted those who were watching. Before, I tried to ease my daughters’ fear by telling them that things would get better. Now I could no longer say this. After that day, I stopped sending my daughters to school.

But we couldn’t shut the conflict out. The military conducted random raids on homes in our neighborhood. While my husband was at work one day, soldiers broke down our door and went through our things. Alone with my daughters, I was in a complete panic. The soldiers ransacked our home and threatened us. They weren’t looking for anyone or anything in particular; they just wanted to instill fear. They even attacked my husband’s car, breaking the windows and slashing the tires. Eventually, they left, taking cash and jewelry with them.

During all of this, I was pregnant. In the fall of 2012, I gave birth to a beautiful baby boy, our first son. He was born with jaundice, and we had to take him to the Al Fateh Hospital occasionally for treatment. This was normal; we didn’t worry. One day, my husband took him there for what was supposed to be a three-hour visit. My husband wasn’t permitted to stay the whole time, so he left.

Later that day, a family friend who worked at the hospital called us. The government believed that a rebel was hiding there, he said, so troops shelled the building. Many children were dead. My 7-day-old son was among them.

We began to think about leaving our country. I had a growing anxiety for our surviving children as violence against women increased. Kidnapping and rape were a constant threat. With five beautiful daughters, this fear pushed us over the edge, and we decided to go.

It was still dark when my family and I left Damascus early one morning in October 2012. There were 12 of us in the hatchback sedan — me, my husband, our girls and some extended family members. Three of the kids were piled into the trunk. All we had were our clothes. We took the alleyways to avoid patrolling tanks and checkpoints on the main roads. The most important thing on our minds was to get to the Lebanese border and not look back.

When we crossed into Lebanon four hours later, we tumbled out of the car to the surprise of onlookers. Today, we wonder how we all squeezed into that car and made it out; I believe God helped us, because it was meant to happen.

When we arrived in Tripoli, where relatives helped us find a small apartment, we still hoped that things in Syria would calm down so we could return. But the situation there only worsened. We weren’t expecting to be out of the country for so long. It took my husband a year to find a job, and when he finally got one — as a furniture delivery man — it was for very little pay, around $15 per day. We had brought $15,000 in savings from home, and we quickly went through it.

We started receiving food vouchers from the United Nations once the organization verified that we were a refugee family. A few hundred dollars for rent came once every few months during the winter. At times, we sold our food vouchers to pay our $400 monthly rent and avoid homelessness.

Because of the dangers and frequent city-wide strikes in Lebanon, my daughters were often unable to go to school. I did my best to encourage them, but it made me sad — I just wanted something better for them. Then I would be the one having a bad day, and my daughters would pick me up and carry me forward.

After a year of living like this, I received a call from the United Nations and was asked if my family would like to resettle in a third country. Based on our documents, stories and circumstances — our large family, five girls, my husband’s potential as a healthy worker — we had been deemed eligible to apply for resettlement.

We could not return home. We could not continue living on the brink of starvation. Now an option for safety was available. We began the application process to come to the United States.

The process started with a series of interviews with U.S. government representatives — at least five in-person interviews with each of us and countless phone conversations. The questions were very detailed: about my family, my friends, how I spent my time. The interviewers often knew the answers to the questions before they asked them. They asked about my life going back to the day I was born; they even knew the location of the hospital. My story is my story, so I knew that the details would match their information. But I was not prepared for the level of scrutiny or the length of the process.

Each member of the family told their story in interviews, and those stories had to be consistent with interviews given by other people who knew us. If our answers didn’t match information the American officials already had, or if they couldn’t validate our information, we didn’t progress to the next step. I had only a glimmer of hope that this would work — and that we could have a safe life for my daughters. We lived on that hope.

Finally, more than a year after we began applying, we were cleared to resettle in the United States in December 2014.

We had $30 for the journey. During an airport layover in Germany, I took the money to buy a drink and, without realizing it, bought a $10 bottle of water. My husband joked that now we were really finished and should just turn back.

After arriving in New York, we were transported by van to Baltimore, where the International Rescue Committee met us at our new home. We felt tired — but safe. We knew no one in this country, and we will always be grateful to the staff who helped us in this strange, new environment.

Like many governors in the United States, our governor, Larry Hogan, has expressed concern about whether it is safe to accept Syrian refugees in Maryland. But we, too, were appalled by the Islamic State’s terrorist attacks in Paris and condemn them wholeheartedly. My family and I lived through horrific acts like these. I believe the screening we underwent was so intense, so thorough and so long that it would be impossible for militants to come here.

We have been here a year. My daughters, who previously spoke no English, are in school, and my husband has a good job as a driver for a clothing company. We have made great friends through playing soccer with several Iraqi families from around the neighborhood. When my husband has days off, we take day trips as a family to Virginia and D.C. and around Maryland.

Some things have not been easy. We’ve had a difficult time connecting with some of our Baltimore neighbors. We have met people who do not understand our Muslim faith. Our children have been made fun of at school because they wear the hijab. At times, we feel like outsiders in our community. But we are also happy. We are grateful to have the chance to feel safe and to try to make it in this country.

My biggest dream is for my daughters to have a good education and good careers, and for us to be part of this society: to learn the language, to do something productive, to integrate. The same thing that saw me through my journey is what guides all mothers — a future for their children. I understand that there is a necessary process for Syrian families to come here, but please don’t close the door.

*Editor’s note: Linda J. and her family are Syrian refugees who made their way from Damascus to Baltimore. She worked with a caseworker and a translator from the International Rescue Committee, the nonprofit agency that helped them resettle here, to tell her family’s story of asylum. The Washington Post agreed that she could abbreviate her last name and omit other identifying details to protect family members in Damascus from persecution.