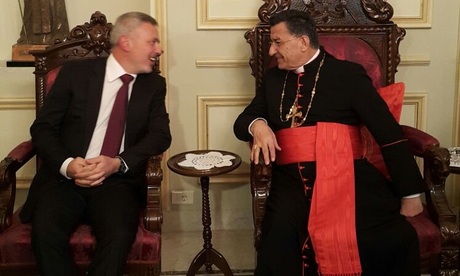 Lebanon’s Maronite patriarch on Saturday urged the political factions to elect a new president, effectively throwing his weight behind a power-sharing plan that would make an ally of Syria’s Bashar al-Assad head of state.

The head of the Maronite Christian community, Patriarch Beshara al-Rai, met leaders of Christian political parties this week, including the touted candidate Suleiman Franjieh, after Saudi Arabia lent its backing to the plan.

“I call on the political blocs to move responsibly, objectively and mindfully toward this new, serious initiative in order to elect a president,” he said at a mass north of Beirut and quoted by Lebanon’s National News Agency.

Rai urged parties to “rise above personal and factional interests” in order to fill the post, which has been vacant for 18 months. He hoped progress could be wrapped up by the end of the year.

The lack of president has contributed to a political crisis that has paralyzed state institutions, including the government which has been unable to take basic decisions. Political rivalries have been exacerbated by the war in neighboring Syria.

The proposal, tabled by Sunni politician Saad al-Hariri, would see him return to Lebanon as prime minister and make Maronite politician Franjieh president. Hariri is backed by Saudi Arabia, while Franjieh is a family friend and close ally of Assad, who is backed by Saudi’s regional rival Iran.

Under Lebanon’s sectarian power-sharing system, the president must always be a Maronite Christian. Two other politicians, Michel Aoun and Samir Geagea, have been vying for the post, but neither has been able to garner the cross-party consensus required.

Franjieh said late on Wednesday his candidacy was not yet official but he was waiting for Hariri to formally endorse it.