I.S. money-making streams take a hit as it loses territory 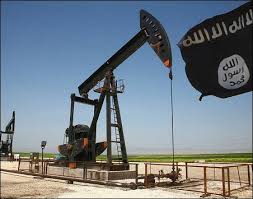 Beirut, Lebanon – By most estimates, the Islamic State is the world’s richest terrorist organization. But it appears to be wrestling with money problems that could affect its ability to wage war while trying to govern millions of people in its self-declared caliphate.

U.S.-backed forces in Iraq and Syria have retaken significant amounts of territory from the group, depriving it of traditional sources of income, analysts say. Towns and villages that the Islamic State had relied on for tax revenue have been captured by Arab and Kurdish opponents. And lucrative spoils of war, including oil fields, properties to confiscate and captives to ransom off, have become scarcer as the group struggles to seize new areas.

“A problem they face is that much of their income over the last two years has been through conquest, confiscation and extortion, and those are all one-time things that aren’t sustainable,” said Quinn Mecham, an assistant professor of political science at Brigham Young University. “And now they’re losing territory, and that makes it difficult to continue to extract revenues. The pressure is on.”

Information about the Islamic State’s finances is murky. But the group’s diverse sources of income, which include extortion and antiquities smuggling, have helped it weather more than a year of airstrikes from a U.S.-led coalition, analyst say. The U.S. Treasury Department recently estimated that the militants could be earning $40 million a month from oil sales.

Through a complex bureaucracy that uses the threat of violence, including floggings and beheadings, the Islamic State also raises cash by taxing and fining the roughly 6 million to 9 million people in parts of Iraq and Syria who live under its rule.

An Islamic State official purportedly told Arabic-language media in January that the group had a 2015 budget of $2 billion. Although likely an exaggerated figure, the group may have accumulated enough cash to run a large budget surplus, said Benjamin Bahney, a terrorism analyst at the Rand Corp.

But the Islamic State lost as much as a third of the territory it had controlled in Iraq, including the city of Tikrit and the Baiji oil refinery. Iraq’s military and pro-government militias have captured those areas with the help of airstrikes from the U.S.-led coalition. In Syria, too, coalition air support has aided an alliance of Kurdish and Arab forces in seizing from Islamic State militants key areas near the group’s self-declared capital of Raqqa.

“As it loses control of cities and as its economy suffers because of the war, its tax revenues are reduced,” said William McCants, an expert on the militant group at the Brookings Institution.
The territorial setbacks also may have compelled the group to turn to terrorism abroad — including the recent attacks in Paris that left 130 people dead — as a way to apply new pressure on its enemies, analysts say. The group, they also say, appears to be shifting resources to reinforce affiliates in other areas of the world, including Libya, possibly to secure a safe haven in case it loses more territory in Syria and Iraq.

There are signs that the group might be tightening its budget. Fighters’ salaries have been reduced recently, from roughly $400 a month to about $300, said Columb Strack, a Middle East analyst at Jane’s Information Group. In addition to a tax system rooted in Islamic law, he said, the group appears to be imposing more fees on everything from farming to mobile phones.

Aid programs that benefit the needy in Islamic State areas appear to have been scaled back, causing poverty to deepen, Syrian activists and aid workers say. These areas, they say, are experiencing acute shortages of medicine for chronic diseases such as diabetes, as well as prolonged electricity cuts.

Aymenn al-Tamimi, a fellow at the Middle East Forum who studies the Islamic State’s finances, said the group took a big hit this summer when Iraq’s government stopped paying civil servants living in areas the militants had captured, including the city of Mosul.

For months, Iraqi authorities continued to pay the salaries, and the Islamic State taxed that income, earning the group a windfall that some estimates put at tens of millions of dollars a month.

Without such easy money, the Islamic State has raised its fees, even on high school registration and textbooks, Tamimi said.

“Now, evidence seems to point to hardship in Mosul, and [the Islamic State] has been resorting to measures to try to deal with the new reality of having to pay those working under its authority who no longer get salaries directly from the Iraqi government,” he said.

ew expect widespread dissent in Islamic State-controlled areas anytime soon, in large part because of fear of the group’s notorious brutality. The threat of violence also prevents many people from fleeing, and war, anemic economies and sectarian-driven politics in neighboring areas prevents others from attempting to leave.

Russia, which does not coordinate with the coalition, also has stepped up air raids in the Islamic State’s key oil-producing areas in eastern Syria.

The Islamic State imposes fees and taxes on refining, shipping and selling oil, which largely is consumed within territory held by the group, analysts say.

“There will be a lag in seeing the effects, but in order to keep operations going, the group will likely have to reduce payments and the number of people working for it,” Clarke said.

That could affect thousands of people, causing local anger to soar and more discontent for the militant group to manage.

“It’s running a caliphate, so it has salaries to pay and people to keep in jobs. They run bakeries and have to find ways to keep the lights on,” he said. “It’s a lot to manage.”