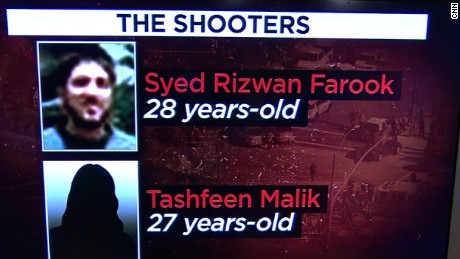 The couple suspected of killing 14 people at a holiday party in California amassed thousands of rounds of ammunition and a dozen pipe bombs, authorities said on Thursday as they sought clues to the pair’s motives and whether they had links to Islamist militants.

Syed Rizwan Farook, 28, and Tashfeen Malik, 27, his wife and mother of his 6-month-old daughter, were killed in a shootout with police five hours after Wednesday’s massacre at the Inland Regional Center social services agency in the city of San Bernardino.

Twenty-one people were wounded in the shooting, which ranks as the deadliest instance of U.S. gun violence in three years.

As the FBI-led investigation pressed on, local authorities completed formally notifying the families of the 14 people who died and released their names to the public.

The victims, all from Southern California, ranged in age from 26 to 60, and most were men, according to a county coroner statement.

San Bernardino Police Chief Jarrod Burguan said at a Thursday news conference that the search of a townhouse leased by the shooting suspects in the nearby community of Redlands turned up flash drives, computers and cellphones.

Officials in Washington familiar with the investigation said so far there was no hard evidence of a direct connection between the couple and any militant group abroad, but the electronics would be checked to see if the suspects had been browsing on jihadist websites or social media.

One U.S. government source told Reuters the FBI was examining information indicating that Farook was in contact with individuals who had themselves been under FBI investigation, some from cases already closed. The source also said it was possible that one or more of the Farook contacts under scrutiny were located overseas.

But no information has yet emerged suggesting any ties or contacts between Farook and the Islamic State or other specific militant groups, the source said.

Officials from President Barack Obama to Police Chief Burguan said the attack may have been motivated by extremist ideology but that questions of motive remained unanswered.

Farook, a U.S. citizen, was born in Illinois, the son of Pakistani immigrants, according to Hussam Ayloush, who heads the Los Angeles area chapter of the Muslim advocacy group Council on American-Islamic Relations (CAIR). Malik was born in Pakistan and lived in Saudi Arabia until they married, Ayloush said.

David Bowdich, FBI assistant director in Los Angeles, said Malik was admitted to the United State on a K-1 “fiancee visa” and was traveling on a Pakistani passport.

The couple entered the United States in July 2014 after a trip that included Pakistan, Bowdich said. Farook also visited Saudi Arabia for nine days in the summer of 2014, the kingdom’s embassy in Washington said.

The director of the Islamic Center of Riverside, a mosque Farook attended regularly for two years until 2014, described him as a devout Muslim who made the pilgrimage to Mecca in Saudi Arabia a few years ago and celebrated his wedding reception at the mosque.

“His degree of faith is very high,” the director, Mustafa Kuko, told Reuters. “He was a very quiet person, peaceful, never had an argument with anyone or a dispute.”

Kuko said Farook attended morning and evening prayers from 2012 to 2014, when he stopped coming abruptly.

Farook, who according to Burguan had no criminal record, worked as an inspector for San Bernardino County Department of Environmental Health, the agency throwing the holiday party that came under attack.

Police cited witness accounts that Farook had been attending the celebration but stormed off in anger, then returned with Malik armed with assault gear and opened fire. Burguan said they sprayed the room with 65 to 70 rounds.

Burguan said the couple had two assault-style rifles, two semi-automatic handguns and 1,600 rounds of ammunition in their rented sport utility vehicle, when they were killed. At the townhouse, police found another 4,500 rounds, 12 pipe bombs and bomb-making equipment.

The guns were legally purchased in the United States, said Meredith Davis, a spokeswoman for the Bureau of Alcohol, Tobacco, Firearms and Explosives (ATF).

Burguan said Farook bought the two handguns. The rifles were purchased by someone else, who Davis said was not linked to the investigation.

In addition to sparking further debate on gun control laws, the latest mass slaying in the United States took place with much of the world on edge following the Nov. 13 attacks in Paris by Islamic State militants that killed 130 people.

Ayloush appealed to the public not to jump to conclusions about the motives behind the San Bernardino attack. He said he was concerned about a backlash against the broader Muslim community in view of the rise of Islamic State and some opposition among politicians and the public in the United States over U.S. plans to accept Syrian war refugees.

“We’re living in a very difficult time,” he told CNN. “There’s a lot of Islamophobia out there, a lot of anti-Muslim sentiment, fueled by pundits here and there trying to blame a whole community for the acts of a few.”

Nizaam Ali, a 23-year-old college student who said he knew Farook from mosque, said Farook prayed two to three times a week during his lunch break at the Dar Al Uloom Al Islamiyah of America mosque in San Bernardino. Ali said he had not seen any signs of radicalization or extremism.

Farook told Ali that he married his wife, whom he met online, in July 2014. Ali added that Farook’s wife wore the niqab, a scarf that covers most of the face, which was something Farook had mentioned he liked about her.

The San Bernardino rampage was the deadliest U.S. shooting incident since the December 2012 massacre at Sandy Hook Elementary School in Newtown, Connecticut in which 27 people, including the gunman, were killed.

There have been more than 350 shootings this year in which four or more people were wounded or killed in the United States, according to the crowd-sourced website shootingtracker.com, which keeps a running tally of U.S. gun violence.

“I don’t think any community is immune,” San Bernardino Mayor Carey Davis told CBS. “Certainly, we don’t anticipate that kind of thing happening here. It was a shock.”

Davis, whose largely working-class city is 60 miles (100 km) east of Los Angeles, said on Twitter he had a “heartfelt conversation” about the killings with Obama, who used the incident to make another call for gun law reform to reduce the likelihood of mass shootings.

“We’re going to have to, I think, search ourselves as a society to make sure that we can take the basic steps that would make it harder – not impossible but harder – for individuals to get access to weapons,” Obama said at the White House.

He ordered flags to be flown at half-staff in memory of the shooting victims.