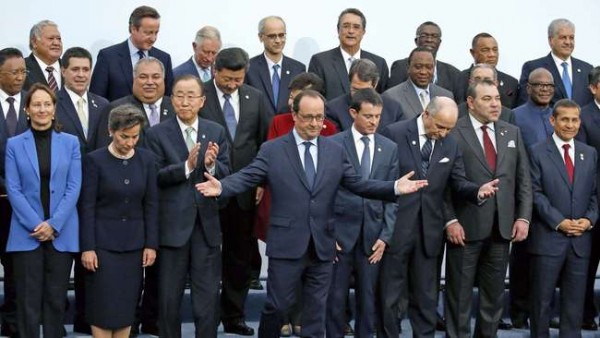 World leaders launched an ambitious attempt on Monday to hold back the earth’s rising temperatures, with French President François Hollande saying the world was at “breaking point” in the fight against global warming.

Some 150 heads of state and government, including US President Barack Obama and his Chinese counterpart Xi Jinping, urged each other to find common cause in two weeks of bargaining to steer the global economy away from its dependence on fossil fuels.

They arrived at United Nations climate change talks in Paris accompanied by high expectations and armed with promises to act. After decades of struggling negotiations and the failure of a summit in Copenhagen six years ago, some form of landmark agreement appears all but assured by mid-December.

Warnings from climate scientists, demands from activists and exhortations from religious leaders like Pope Francis have coupled with major advances in cleaner energy sources like solar power to raise pressure for cuts in carbon emissions held responsible for warming the planet.

Most scientists say failure to agree on strong measures in Paris would doom the world to ever-hotter average temperatures, bringing with them deadlier storms, more frequent droughts and rising sea levels as polar ice caps melt.

Facing such alarming projections, the leaders of nations responsible for about 90 percent of the world’s greenhouse gas emissions have come bearing pledges to reduce their national carbon output, through different measures at different rates.

For some, climate change has become a pressing issue at home. As the summit opened in Paris, the capitals of the world’s two most populous nations, China and India, were blanketed in hazardous, choking smog, with Beijing on “orange” pollution alert, the second-highest level.

Over the next two weeks, negotiators will hammer out the strongest international climate pact yet. The deal will mark a momentous step in the often frustrating quest for global agreement, albeit one that – on its own – will not be enough to prevent the earth’s temperatures from rising past a damaging threshold.

“What should give us hope that this is a turning point, that this is the moment we finally determined we would save our planet, is the fact that our nations share a sense of urgency about this challenge and a growing realisation that it is within our power to do something about it,” said Obama, one of the first leaders to speak at the summit.

See below for our live coverage of the first day of the summit. Smartphone and tablet users can view the blog by clicking here.