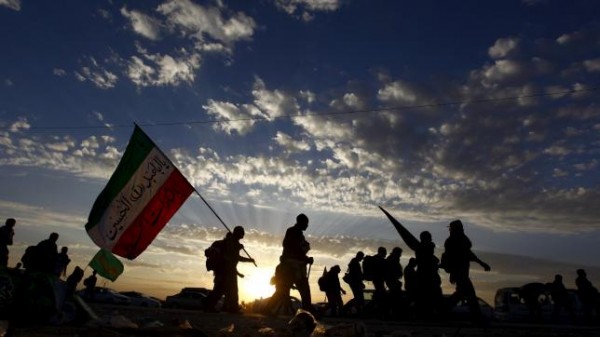 Shi’ite Muslim pilgrims walk to the holy city of Karbala, ahead of the holy Shi’ite ritual of Arbaeen, in Najaf, November 30, 2015. REUTERS /Alaa Al-Marjani
Share:

Iraq’s interior ministry blamed Iranian authorities on Monday for allowing tens of thousands of Shi’ite Muslim pilgrims to storm a border crossing and enter the country without visas, in a rare public confrontation between the two neighbors.

The ministry said in a statement that the pilgrims, traveling on foot toward the Shi’ite shrine city of Karbala to take part in the annual Arbaeen religious ritual, overwhelmed security forces on Sunday, pulling down fences and injuring border guards.

It accused them of deliberately rushing the border crossing in order to pressure security forces to allow them to enter illegally, and it said the border guards had refrained from exercising their right to use force against them.

“We hold the Iranian side responsible because they did not fulfill their duties and obligations” to prevent those without visas from approaching the crossing, the ministry said.

Iraq’s Shi’ite-led government is heavily backed by Iran, which also provides training, arms and money to Iraq’s powerful Shi’ite militias, seen as a bulwark in the battle against Islamic State militants in the country’s north and west.

Many leading Shi’ite politicians in Iraq including former Prime Minister Nuri al-Maliki developed close ties with Iran while living in exile there during the rule of Saddam Hussein, from the Sunni minority, who brutally repressed Shi’ites before he was toppled by the 2003 U.S.-led invasion.

Video posted online on Monday appeared to show hundreds of pilgrims dressed from head to toe in black forcing open a large gate and running through the checkpoint. Few security forces appeared to be present.

Reuters could not independently verify the footage.

One local official said the number of pilgrims who entered Iraq illegally at the Zurbatiya crossing had exceeded half a million.

Hundreds of Iranian pilgrims each day purchase $30 entry visas to visit southern Iraq, where the most revered shrines in Shi’ite Islam are located.

The pilgrims this week are partaking in Arbaeen, the end of a 40-day mourning period following the commemoration of the death in battle of the Prophet Mohammad’s grandson Imam Hussein in 680.

Hussein’s death entrenched the schism between Shi’ites and Sunnis which has sharply divided Iraq for years.

The sectarian conflict gripping Iraq, mostly between the Sunni minority and the now dominant Shi’ites, has been exacerbated by the rise of the ultra-hardline Sunni militants of Islamic State.