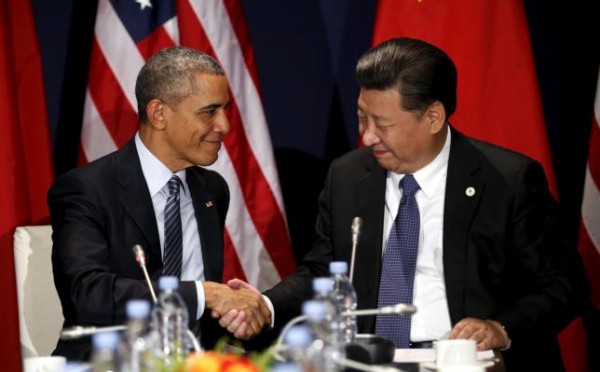 World leaders launched an ambitious attempt on Monday to hold back the earth’s rising temperatures, with French President Francois Hollande saying the world was at a “breaking point” in the fight against global warming.

Some 150 heads of state, including U.S. President Barack Obama and his Chinese counterpart Xi Jinping, will urge each other to find common cause in two weeks of bargaining to steer the global economy away from its dependence on fossil fuels.

They arrived at United Nations climate change talks in Paris armed with promises and accompanied by high expectations. After decades of struggling negotiations and the failure of a previous summit in Copenhagen six years ago, some form of landmark agreement appears all but assured by mid-December.

Warnings from climate scientists, demands from activists and exhortations from religious leaders like Pope Francis, coupled with major advances in cleaner energy sources like solar power, have all added to pressure to cut the carbon emissions held responsible for warming the planet.

Most scientists say failure to agree on strong measures in Paris would doom the world to ever-hotter average temperatures, bringing with them deadlier storms, more frequent droughts and rising sea levels as polar ice caps melt.

Facing such alarming projections, the leaders of nations responsible for about 90 percent of the world’s greenhouse gas emissions have come bearing pledges to reduce their national carbon output, though by different rates.

For some, it has already become a pressing issue at home. As the summit opened in Paris, the capitals of the world’s two most populous nations, China and India, were blanketed in hazardous, choking smog, with regulators in Beijing asking factories to limit output and halting construction work.

Success in agreeing what would be by far the strongest international pact yet to commit both rich and developing nations to the fight against global warming “is not yet achieved, but it is within reach,” French Foreign Minister Laurent Fabius, chairman of the meeting, told delegates.

On the eve of the summit, hundreds of thousands of people from Australia to Paraguay joined the biggest day of climate change activism in history, telling world leaders there was “No Planet B” in the fight against global warming.

“To resolve the climate crisis, good will, statements of intent are not enough,” Hollande said. “We are at breaking point.”

The leaders gathered in a vast conference center at Le Bourget airfield, near where Charles Lindbergh landed his Spirit of St. Louis aircraft in 1927 after making the first solo trans-Atlantic flight, a feat that helped bring nations closer.

Whether a similar spirit of unity can be incubated in Le Bourget this time is uncertain. In all, 195 countries are part of the unwieldy negotiating process, espousing a variety of leadership styles and ideologies that has made consensus elusive in the past. Key issues, notably how to divide the global bill to pay for a shift to renewable energy, are still contentious.

Signaling their determination to resolve the most intractable points, senior negotiators sat down on Sunday, a day earlier than planned, to begin thrashing out an agreement. They hope to avoid the last-minute scramble and all-nighters that marked past meetings.

The last attempt to get a global deal collapsed in chaos and acrimony in Copenhagen in 2009. It ended with Obama forcing his way into a closed meeting of China and other countries on the gathering’s last day and emerging with a modest concession to limit rising emissions until 2020 that they attempted to impose on the rest of the world.

Anxious to avoid a re-run of the Copenhagen disaster, major powers have tried this time to smooth some of the bumps in the way of an agreement before they arrive.

The presidents, prime ministers and princes will make their cameo appearances at the outset of the conference rather than swooping in at the end.

In a somber city where security has been tightened after Islamist militant attacks killed 130 people on Nov. 13, Hollande said he could not separate “the fight with terrorism from the fight against global warming.” Leaders must face both challenges, leaving their children “a world freed of terror” as well as one “protected from catastrophes”.

Each leader is allowed a brief opening speech, just a few minutes long. The goal is to build momentum for consensus and avoid the messiness of past talks when diplomats put off the hard political choices until their bosses arrived.

But there are other significant changes in approach.

The old goal of seeking a legally binding international treaty, certain to be dead on arrival in the Republican-controlled U.S. Congress, has been replaced by a system of national pledges to reduce emissions.

Some are presented as best intentions, others as measures legally enforced by domestic laws and regulations.

The biggest difference may be the partnership between the United States and China. The world’s two biggest carbon emitters, once on opposite sides on climate issues, agreed in 2014 to jointly kick-start a transition away from fossil fuels, each at their own speed and in their own way.

The United States and China “have both determined that it is our responsibility to take action,” Obama said after meeting Xi. “Our leadership on this issue has been absolutely vital.”

That partnership has been a balm for the main source of tension that characterized previous talks, in which the developing world argued that countries that grew rich by industrializing on fossil fuels should pay the cost of shifting all economies to a renewable energy future.

Now even China, once a leading voice of that club, has agreed to contribute to an internationally administered Green Climate Fund that hopes to dispense $100 billion a year after 2020 as a way to finance the developing world’s shift towards renewables.

If a signed deal now appears likely, so too is the prospect that it will not be enough to prevent the world’s average temperature from rising beyond 2 degrees Celsius (3.6 Fahrenheit) above pre-industrial levels.

That is widely viewed as a threshold for dangerous and potentially catastrophic changes in the planet’s climate system.

Instead, the summit will produce a “long-term framework” for additional reductions down the road, Obama said in a Facebook posting on Sunday, with “targets set by each nation, but transparent enough to be verified by other nations.”

How and when nations should review their goals — and then set higher, more ambitious ones — must still be hammered out.

One sign of optimism was that Indian Prime Minster Narendra Modi, a key player because of his country’s size and its heavy dependence on coal, will announce an international solar alliance of more than 100 sun-kissed countries, with the aim of raising India’s profile on solar power.

A handful of the world’s richest entrepreneurs, including Bill Gates, have pledged to double the $10 billion they collectively spend on clean energy research and development in the next five years.
Reuters