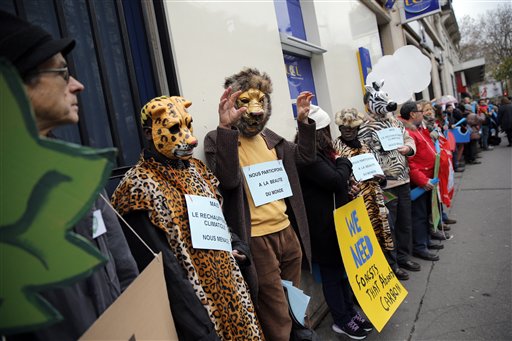 Activists form a human chain during a protest ahead of the 2015 Paris Climate Conference, in Paris, Sunday, Nov. 29, 2015. More than 140 world leaders are gathering around Paris for high-stakes climate talks that start Monday, and activists are holding marches and protests around the world to urge them to reach a strong agreement to slow global warming. (AP Photo/Christophe Ena)
Share:
Government and business leaders are banking on clean energy technology to fight global warming, kicking off this week’s high-stakes climate change negotiations by pledging billions of dollars to research and develop a technical fix to the planet’s climate woes.

Microsoft founder and philanthropist Bill Gates, President Barack Obama and French President Francois Hollande will launch a joint initiative on Monday after a diplomatic push in recent weeks ahead of the Paris climate conference.

A key goal is to bring down the cost of cleaner energy. At least 19 governments and 28 leading world investors, including Facebook founder Mark Zuckerberg, billionaires George Soros and Saudi Prince Alaweed bin Talal, and Jack Ma of China’s Alibaba, have signed on so far.

It’s quite a big deal, said Jennifer Morgan, global climate director for the World Resources Institute. “It brings a new kind of burst of energy into the conference right at the beginning on something very important.”
The U.N. climate summit formally opened Sunday afternoon with a minute of silence for the victims of this month’s Paris attacks and vows not to let terrorism derail efforts to slow or stop climate change. A few kilometers (miles) away in Paris, police trying to secure the nation against new violence sprayed tear gas on protesters who defied a ban on demonstrations and lobbed projectiles.

A big sticking point at the climate talks will be money – how much rich countries should invest help poor countries cope with climate change, how much should be invested in renewable energy, and how much traditional oil and gas producers stand to lose if countries agree to forever reduce emissions.

The governments pledge to double their spending on low or no-carbon energy over the next five years, according to Brian Deese, senior adviser to Obama on climate and energy issues. They include leading energy producers and consumers, such as the U.S. China, India, Brazil, Saudi Arabia, Australia, Canada, France and Norway. They currently invest about $10 billion a year total, about half of which comes from the U.S., Deese told reporters in Washington.

Gates committed $1 billion of his money and was the intellectual architect behind the effort to get investors involved, U.S. Energy Secretary Ernest Moniz said. The business leaders are making their pledges conditional on governments also pledging more money, said a former U.S. government official who is familiar with the plan.

President Barack Obama, who arrived in Paris late Sunday night, wrote on his Facebook page that we’ll work to mobilize support to help the most vulnerable countries expand clean energy and adapt to the effects of climate change we can no longer avoid.

The money would focus on research and development of technologies such as energy storage, which could make better use of clean power from wind and solar regardless of the vagaries of weather. It will also look at farming and transport.

But a multinational research effort combining the investments of governments, corporations and private individuals could create intellectual property problems.

It also remains to be seen how much of this money will involve repackaging old promises, and whether the future funding will be approved in U.S. or other budgets.

“The Obama administration recognizes that this is a fundamental competitive advantage for the United States, a former U.S. official said, but getting such funds approved by a Republican-controlled Congress could be difficult.

U.S. Energy Secretary Ernest Moniz has traveled to several countries to seek support for the plan. A major driver of the acceleration to work together is climate change, he told reporters in Washington.

Storing electricity is especially crucial for wind and solar power, which can be intermittent because of the weather. Improving batteries is key, and there have been breakthroughs both in technology and production announced this year, including by space and electric car tycoon Elon Musk, whose Gigafactory has begun producing large batteries for home power storage to make solar and wind power more viable.

Only our governments have the mandate to protect the public interest as well as the resources and mechanisms to do this, says a statement released early Monday in Paris by the private investors in the Breakthrough Energy Coalition. However, current governmental funding levels for clean energy are simply insufficient to meet the challenges before us

The conference center where delegates from more than 190 nations will be meeting for two weeks began to bustle Sunday as lower-level negotiators arrived, and U.N. climate chief Christiana Figueres expressed optimism about the outcome.

World leaders were expected to arrive on Monday to discuss commitments to reducing ever-rising carbon dioxide emissions from the burning of fossil fuels.

Armed security was noticeable nearly everywhere at the Le Bourget center, and 200 to 300 people violated a national ban on protests under the state of emergency France declared when extremists killed 130 people in Paris. Obama visited the site of the worst massacre soon after arriving.

About 100 protesters found to have projectiles or other suspicious objects were detained after some demonstrations turned violent, said the Paris police chief, Michel Cadot. Thousands of other people joined peaceful demonstrations in other European capitals on Sunday.