‘No Islamic State group in Aleppo, so who is Russia bombing? Eyewitness asks 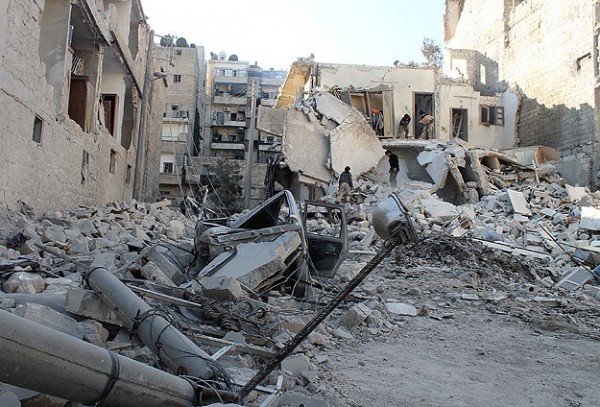 Residents look for survivors from what residents said was due to shelling by Russian warplanes in Aleppo, where ISIS does not exist
Share:

By Rami Jarah
Ever since Russia began its bombing campaign in Syria in September, it has claimed to be targetting the Islamic State (IS) organisation. However, using geolocation techniques, many analysts quickly realised that Russian jets overwhelmingly target rebel-held territory, and only rarely IS group positions. Shocked by the lack of reaction from the international community, a Syrian exile decided to return to his war-torn country to film the bombings.

When the conflict in Syria broke out in 2011, Rami Jarah, a young man from Damascus, became one of them most prominent citizen journalists keeping foreign media abreast of the developments, thanks to his perfect English. At the time, he went by the pseudonym “Alexander Page”. He fled the country at the end of 2011, first moving to Egypt, then Turkey. But he never stopped reporting on Syria: he founded a citizen media project, ANA Press, with a group of Syrian friends, and has taken regular trips back into his country to report on the situation.

He recently arrived in the rebel-held city of Aleppo in Syria, where he now plans to stay indefinitely. He has filmed several videos showing the aftermath of air raids, in which medics scramble to save victims from the rubble. He also filmed a video in which he asks various Aleppo residents whether the IS group is present in their city. They all answer an unequivocal “no”.

Because of the lack of foreign journalists in Syria at the moment, the international public is not receiving verified information about what’s going on. There’s a vacuum in which propaganda is allowed to thrive. That’s why I felt I had to come back.

I have seen no signs of any fundamentalist or extremist factions in Aleppo – and of course, that includes the IS group. If IS group fighters were here, I certainly wouldn’t be able to go around asking people in the streets whether or not they like IS jihadists. I wouldn’t be alive! Yes, IS group fighters are present in the area to the northeast of Aleppo, and, like the regime, have repeatedly tried to cut off roads to the city. But to say that IS extremists are present inside Aleppo is simply propaganda.

It’s also important to note that neither Russian nor Syrian airstrikes have targeted IS group positions to the northeast of the city. It’s almost as if a strong presence of IS jihadists gives them a good excuse to continue their airstrikes… Locals believe that the Syrian regime wants to quash the rebels first and foremost, before dealing with the IS group.

The fighter jets carry about 10 to 15 air strikes every day. The bombs are landing in markets, in very populated areas, sometimes killing up to 50 people in one airstrike. Each time I’ve gone to the site of an attack, I ask myself whether there are any particular Free Syrian Army [rebel] targets there, but the answer is always no. It seems to be totally random.

People here can quickly tell the difference between a Syrian plane and a Russian one, not just due to the sounds of the missiles but due to the impact. The impact of a Russian airstrike is much larger… The civil defence medics are overwhelmed. I’ve seen cases where a person is trapped under the rubble, but the teams are unable to get them out. It’s hard to watch.

The morale of the people of Aleppo is very low at the moment. They feel vulnerable, since they have three enemies: the IS group, Assad’s regime, and now Russia. That the international community allows Russia to continue these air strikes on civilians – while lying about their reasons for them – has left Aleppo residents feeling that freedom, democracy and human rights are just phrases. They’ll seldom say it on camera, but off-camera, people will often tell you that they don’t believe in these principles anymore.

The investigative journalism organisation Bellingcat has analysed every single video released by Russia’s defence ministry showing their air strikes in Syria. According to their report, in many cases, the actual targets were not those reported by the ministry, and in most cases, the IS group was not known to be present in the actually targeted area