Turkish president warns Russia not to ‘play with fire’ 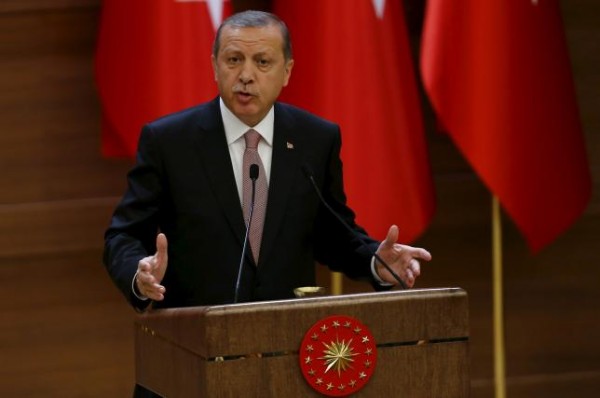 Turkish President Tayyip Erdogan makes a speech during his meeting with mukhtars at the Presidential Palace in Ankara, Turkey, November 26, 2015. REUTERS/Umit Bektas
Share:
Turkish President Recep Tayyip Erdogan warned Russia not to “play with fire” on Friday, but added he did not want to harm relations with Moscow, comments that look more likely to inflame than quell the dispute over a downed Russian bomber this week.

Relations between the former Cold War antagonists are at their worst in recent memory after Turkey shot down the jet near the Syrian border on Monday. Russia has threatened economic retaliation against Ankara, which Erdogan has dismissed as “emotional” and “unfitting”.

“We very sincerely recommend to Russia not to play with fire,” Erdogan told supporters during a speech in Bayburt, in northeast Turkey. “We really attach a lot of importance to our relations with Russia… We don’t want these relations to suffer harm in any way.”

Erdogan said he may speak with Russian President Vladimir Putin at a climate summit in Paris next week, a discussion that would be welcomed by the United States and EU, both of which fear the spat has distracted from the battle against Islamic State militants in Syria.

Putin has so far refused to contact Erdogan because Ankara does not want to apologize for the downing of the jet, Putin aide Yuri Ushakov said on Friday.

Erdogan said Turkey downed the jet as a result of what he called the automatic enforcement of the rules of engagement.

Russia’s lower house speaker, Sergei Naryshkin, said on Friday that Moscow had the right to make a military response, calling the incident an “intentional murder of our soldiers”.

Reuters
This is to remind all our readers to respect the community . Comments that contain personal attacks or inappropriate language will be removed.
For those who are new to this site please note that Ya Libnan is all about fixing Lebanon.
We want our readers to come up with ideas that if implemented will make lebanon a better country.
Ya Libnan is a democratic venue that is open to anyone wishing to contribute any ideas to improve Lebanon. Our only wish is to maintain the civility of the discussions and that is why those who have not been able to abide by this rule have been banned from participating in this forum . We don’t want or expect anything from anyone …better lebanon is the only reward we seek. Help us get there!