Americans are more skeptical than ever of how Islam squares with their values and way of life — and yet very few Americans actually seem to interact with Muslims at all.

Those are findings from separate surveys from the Public Religion Research Institute that suggest that how Americans perceive Muslims is tied more to headlines than personal experiences. The nonprofit just release its annual American Values Survey, which found that Americans’ perceptions of Islam have turned “sharply negative over the past few years.”

A majority of Americans (56 percent) say the values of Islam are at odds with American values and way of life — an uptick in recent years. 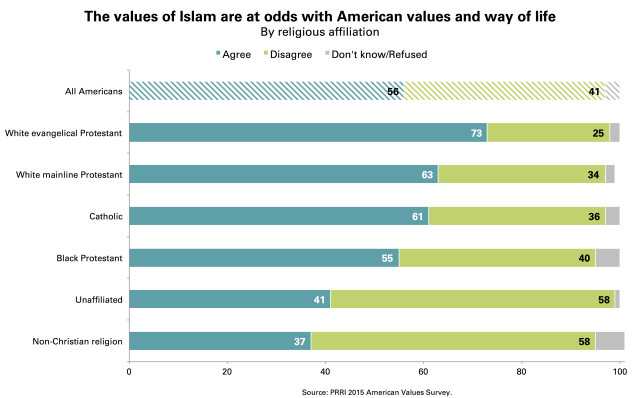 (PRRI has asked this question four times since 2010, according to polling archives. Their most recent survey was conducted in September and early October, before the Paris attacks and before GOP presidential candidates amped up their rhetoric when it comes to Islam and terrorism.)

But Robert Jones, the founder and CEO of PRRI, pointed out in an interview that aired Sunday with public radio news magazine Interfaith Voices that Americans are basing those opinions largely on people they don’t interact with.

“Muslims make up only about 1 percent of the U.S. population,” he told host Maureen Fiedler, “and they’re also heavily concentrated in just a few cities around the country.”

(Like this one outside Detroit, where The Washington Post’s Sarah Pulliam Bailey reported tensions are running high between old and new residents.)

The geography of where American Muslims live could help explain why, when asked in an August 2011 PRRI survey, seven in 10 Americans said they have seldom or even never had a conversation with anyone who is Muslim in the past year. Before 9/11 in fact, Jones said, most Americans hadn’t really thought much about Islam.

That’s changed, of course. At first Americans gave Muslims what Jones called a kind of “grace period,” largely thanks to President George W. Bush emphatically declaring America is not at war with Islam (a point Democratic front-runner Hillary Clinton likes to make but Republican candidates have disagreed with).

But as the years in the war on terror dragged on, Americans’ perceptions have soured about a culture and religion they still remain largely separate from.

The act of simply knowing someone from a minority group can be a powerful perception game-changer. Look no further than the recent speedy cultural shift toward accepting gay and lesbian Americans — and allowing them to marry — that coincided with more and more celebrities and athletes and neighbors and co-workers being open about their sexuality.
In fact, by the time the Supreme Court legalized same-sex marriage in June, nine in 10 Americans said they knew someone who was gay. It would seem Americans don’t have that kind of connection with Muslims.

Filling that knowledge gap is, of course, the media. And the brutality of the Islamic State — taped beheadings, brash threats, the Paris attacks — is dominating most American news coverage about Islam these days.

When looked at through that perspective, it makes sense why a Washington Post/ABC News poll found 54 percent of Americans oppose bringing 10,000 new Syrian refugees into the country even after screening them.

“We know that most Americans could not put Syria on a map,” Jones told Interfaith Voices. “So what they hear is ‘Syria equals Middle East equals Muslim.'”

And in the absence of people they know — and perhaps like — who are Muslim, Americans’ perceptions of what it means to be one could remain negative for as long as the headlines are.

THE WASHINGTON POST
This is to remind all our readers to respect the community . Comments that contain personal attacks or inappropriate language will be removed.
For those who are new to this site please note that Ya Libnan is all about fixing Lebanon.
We want our readers to come up with ideas that if implemented will make lebanon a better country.
Ya Libnan is a democratic venue that is open to anyone wishing to contribute any ideas to improve Lebanon. Our only wish is to maintain the civility of the discussions and that is why those who have not been able to abide by this rule have been banned from participating in this forum . We don’t want or expect anything from anyone …better lebanon is the only reward we seek. Help us get there!