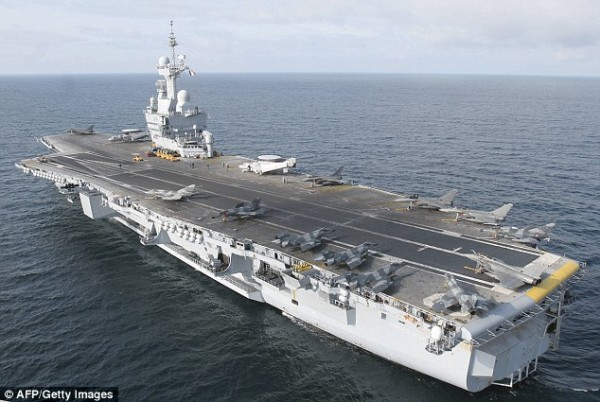 France’s sole aircraft carrier, the Charles de Gaulle,
Share:
The Paris terror attacks are likely to galvanize a stronger global military response to Islamic State, after a U.S.-led air war that has lasted more than a year has failed to contain a group now proving itself to be a growing worldwide threat.

The United States, long accused of taking an incremental approach to the struggle, is under growing political pressure at home and abroad to do more and it is expected to examine ways to intensify the campaign, including through expanded air power.

U.S. officials say Washington will look in particular to European and Arab allies to step up their military participation in the war in Iraq and Syria.

It remains far from clear whether Paris and Washington would be willing to radically expand the scope of their current military engagement, given a deep aversion to getting dragged into a large-scale ground war in the Middle East. But President Barack Obama has been committing more to the fight in recent months, and lawmakers and counter-terrorism experts see the Paris attacks strengthening arguments for additional military might.

Islamic State claimed responsibility for Friday’s attacks, which killed 129 people in Paris, in the worst bloodshed in France since the end of World War Two.

In the past two weeks, there have been other major Islamic State-claimed attacks. Two explosions in suicide attacks in a Shi’ite Muslim district of southern Beirut in Lebanon killed 43, and 224 died when a Russian aircraft crashed in Egypt’s Sinai Peninsula.

Senator Dianne Feinstein, the top Democrat on the Senate Intelligence Committee, said it had become clear that Obama’s strategy of limited air strikes coupled with support for ground forces in Iraq and Syria “are not sufficient to protect our country and our allies.”

“The fight is quickly spreading outside Iraq and Syria, and that’s why we must take the battle to them,” Feinstein said.

Bruce Riedel, a former senior CIA expert on the region who has advised Obama, said the string of recent attacks had put to rest once and for all the debate whether Islamic State would stay focused on the war in Iraq and Syria.

“It is a game changer in this sense: there were those who debated whether the Islamic State would stay focused local – or go global. I think that debate’s over now,” said Riedel, now at the Brookings Institution.

FRENCH CARRIER ON THE WAY

Republicans seeking the party’s nomination to be its candidate in the 2016 presidential election have also been ratcheting up the pressure after the Paris attacks. One of them, former Florida governor Jeb Bush, said that the Islamic terrorists were engaged in “an organized effort to destroy Western civilization” and the U.S. needed to take the lead against them. “This is the war of our time,” Bush told conservative radio talk show host Hugh Hewitt on Friday night.

France, which has described the Paris assault as an act of war, can quickly ramp up its contribution to the air campaign against Islamic State targets.

Even before the Paris attacks, France had announced that its sole aircraft carrier, the Charles de Gaulle, would be deployed to the Middle East, arriving on November 18.

“We’re only a matter of days before the French carrier departs and heads to the Persian Gulf to do strikes,” said former FBI official Martin Reardon, now with The Soufan Group consultancy. “I think France will do more.”

Obama, only last month, agreed to send U.S. special operations forces to Syria to coordinate with opposition fighters on the ground – something he had ruled out previously. He also deployed more U.S. aircraft to a base in Incirlik, Turkey.

U.S. officials say they are in discussions with allies, including from Arab nations, to also increase their roles in the air campaign. Talks are also underway about whether allies might deploy special operations forces, in Iraq and Syria.

Riedel and other former U.S. officials said one quick way the United States and its allies could do damage to Islamic State would be to expand pressure on its leadership. Such pressure has been steadily growing with precision strikes in recent months.

The same day as the Paris attacks unfolded, the United State carried out an operation to kill the Islamic State’s leader in Libya. A day earlier, it announced the death in Syria of a more symbolic target, striking an Islamic State figure, known as “Jihadi John,” who once taunted the West in hostage execution videos.

U.S. officials say such strikes show the United States could widen the field of battle.

“We’re looking at going after ISIL wherever we can hit them,” one U.S. official said using another name for the Islamic State.

So far, however, the United States has refrained from direct bombardment of known Islamic State headquarters buildings in its self-proclaimed capital of Raqqa, Syria.

That, individuals with knowledge of the matter said, is in part because of the risk of large-scale civilian casualties.

It remains to be seen whether the self-restraint will continue, and whether the Obama administration will generally loosen rules of engagement for airstrikes that some in Congress and elsewhere have called too restrictive.

Another question, officials and analysts said, is whether the United Kingdom will expand the airstrikes and airborne intelligence assets it has already used over Iraq to Syria.

London has not struck at Islamic State in Syria and although British Prime Minister David Cameron is said to be eager to take that step, he faces resistance from U.K. lawmakers.

“The question is really, will this change the British parliament?” the U.S. official said.