You Stink stages another protest. Dumps garbage in front of several ministries 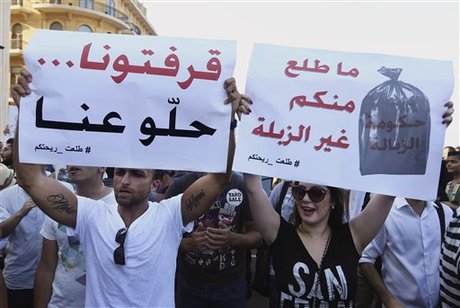 While the parliament was holding its first legislative  session in more than a year the You Stink activists  were busy dumping  garbage since  early Thursday in front of several ministries  to protest the government’s dysfunction  and its inability to resolve the garbage crisis , National News Agency reported.

The   You Stink  activists dumped garbage  near the ministries of Environment, Labor, Energy, Foreign, Culture, Education, Social Affairs, Industry and the Displaced.

Three of the activists  were arrested including Tarek al-Mallah, Sukayna Fawwaz and Claude Jaber who was later released, reports said.

A trash crisis that erupted last  July following the closure of the Naameh landfill .

A plan that was proposed by Agriculture Minister Akram Shehayyeb and approved by the cabinet in early September to solve the the  crisis has run into several  obstacles.

Now the government is seriously thinking about exporting the garbage . Syria seems interested