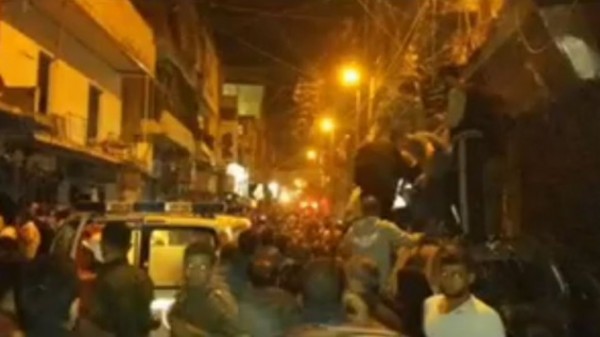 At least 40 people were killed and more than 200 wounded on Thursday in two suicide bomb blasts in a crowded district in Beirut’s southern suburbs, a stronghold of the Shi’ite Muslim group Hezbollah.

The blasts occurred almost simultaneously and struck a Shi’ite community center and a nearby bakery in the commercial and residential area of Borj al-Barajneh, security sources said. A closely guarded Hezbollah-run hospital is also nearby.

The bombings were the first attacks for more than a year in a stronghold of the Iran-backed movement, which has sent members to Syria to fight alongside President Bashar al-Assad’s forces in the country’s civil war.

The group said in a statement posted on Twitter by its supporters, that its members blew up a bike loaded with explosives in a street in the Borj al-Barajneh area and when people gathered, a suicide bomber blew himself up among them causing more casualties and killing 40 people. 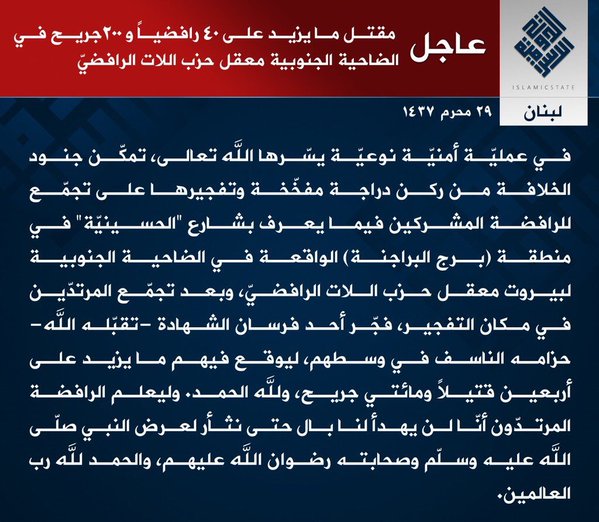 The war in Lebanon’s larger neighbor, with which it shares a border of more than 300 km (190 miles), has ignited sectarian strife in the multi-confessional country, leading to bombings and fighting between supporters of the opposing sides in Syria.

Interior Minister Nouhad Machnouk gave the latest death toll. He also said a third suicide bomber had been killed by one of the explosions before he could detonated his own bomb. His body was found nearby.

Medics rushed to treat the wounded after the explosions, which damaged shopfronts and left the street stained with blood and littered with broken glass.

It was a blow to Hezbollah’s tight security measures in the area, which were strengthened following bombings last year. The army had also set up checkpoints around the southern suburb entrances.

Lebanon’s Prime Minister Tammam Salam condemned the attacks as “unjustifiable”, and called for unity against “plans to create strife” in the country, urging officials to overcome their differences.

The bombers struck as Lebanese lawmakers held a legislative session for the first time in over a year. An ongoing political crisis has left the country without a president for 17 months, with the government failing to take even basic decisions.

Religious leaders warned last year that in the absence of a head of state, sectarian strife was threatening a country that was gripped by its own civil war from 1975 to 1990.