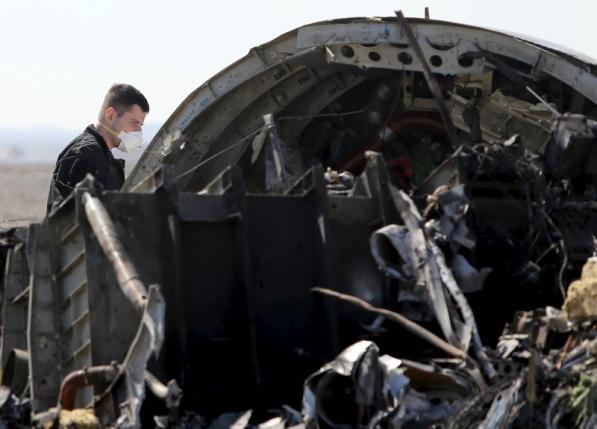 A military investigator from Russia stands near the debris of a Russian airliner at its crash site at the Hassana area in Arish city, north Egypt, November 1, 2015. REUTERS/Mohamed Abd El Ghany
Share:
Investigators of the Russian plane crash in Egypt are “90 percent sure” the noise heard in the final second of a cockpit recording was an explosion caused by a bomb, a member of the investigation team told Reuters on Sunday.

The Airbus (AIR.PA) A321 crashed 23 minutes after taking off from the Sharm al-Sheikh tourist resort eight days ago, killing all 224 passengers and crew. Islamic State militants fighting Egyptian security forces in Sinai said they brought it down.

“The indications and analysis so far of the sound on the black box indicate it was a bomb,” said the Egyptian investigation team member, who asked not to be named due to sensitivities. “We are 90 percent sure it was a bomb.”

His comments reflect a higher degree of certainty about the cause of the crash than the investigation committee has so far declared in public.
Lead investigator Ayman al-Muqaddam announced on Saturday that the plane appeared to have broken up in mid-air while it was being flown on auto-pilot, and that a noise had been heard in the last second of the cockpit recording. But he said it was too soon to draw conclusions about why the plane crashed.

Confirmation that militants brought down the airliner could have a devastating impact on Egypt’s lucrative tourist industry, which has suffered from years of political turmoil and was hit last week when Russia, Turkey and several European countries suspended flights to Sharm al-Sheikh and other destinations.

It could also mark a new strategy by the hardline Islamic State group which holds large parts of Syria and Iraq.

Asked to explain the remaining 10 percent margin of doubt, the investigator declined to elaborate, but Muqaddam cited other possibilities on Saturday including a fuel explosion, metal fatigue in the plane or lithium batteries overheating.

He said debris was scattered over a 13-km (8-mile) area “which is consistent with an in-flight break-up”.

“What happened in Sharm al-Sheikh last week, and to a lesser extent with the … (Germanwings) aircraft, are game changers for our industry,” Emirates Airlines President Tim Clark said, referring to the crash of a Germanwings airliner in the French Alps in March, believed crashed deliberately by its co-pilot.

“They have to be addressed at industry level because no doubt the countries — U.S., Europe — I would think will make some fairly stringent, draconian demands on the way aviation works with security,” he said at the Dubai Airshow.

Clark said he had ordered a security review but was not suspending any flights as a result of the disaster. Emirates does not operate regular flights to Sharm al-Sheikh.

“If this turns out to be a device planted by an ISIL operative or by somebody inspired by ISIL, then clearly we will have to look again at the level of security we expect to see in airports in areas where ISIL is active,” Hammond told the BBC.

Islamic State, which wants to establish a caliphate in the Middle East, is also called ISIS or ISIL.

Islamic State militants fighting security forces in Egypt’s Sinai Peninsula have said they brought down the aircraft as revenge for Russian air strikes against Islamist fighters in Syria. They said they would eventually tell the world how they carried out the attack.

If the group was responsible, it would have carried out one of the highest profile killings since al Qaeda flew passenger planes into New York’s World Trade Center in September 2001.

Russia has returned 11,000 of its tourists from Egypt in the last 24 hours, RIA news agency said on Sunday, a fraction of the 80,000 Russians who were stranded by the Kremlin’s decision on Friday to halt all flights to Egypt.

In St Petersburg, where the flight was headed on Oct. 31, the bell of St Isaac’s Cathedral rang 224 times and a service was held in memory of the victims.

Russia has sent specialists to conduct a safety audit of Egypt’s airports and to provide recommendations on additional measures, Arkady Dvorkovich, deputy prime minister, was quoted as saying by Russian agencies.

Dvorkovich, the head of a government group created on Friday to deal with suspended flights to Egypt, added a second group was going to Egypt on Sunday and a third would be sent later.

A British official said on Saturday it could take 10 days for all British tourists to be flown home.