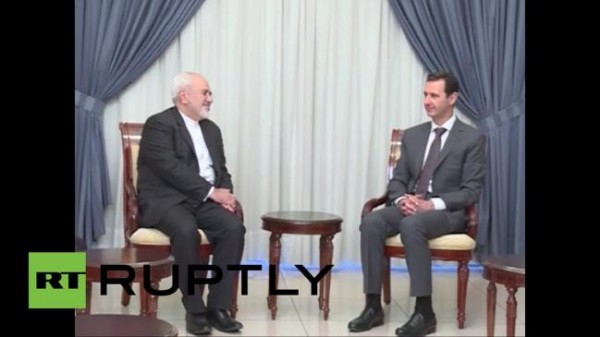 Iranian Foreign Minister Javad Zarif shown meeting with Syrian President Bashar al-Assad in Damascus. Saudi Arabia has said Iran must accept the removal of Assad as part of any solution to the conflict in Syria.
Share:

Saudi Arabia has said Iran must accept the removal of President Bashar al-Assad as part of any solution to the conflict in Syria.

Saudi Foreign Minister Adel al-Jubeir made the remarks as talks among international foreign ministers on the crisis get under way in Vienna.

Iran is for the first time taking part in such talks, which will also include Russia and Turkey.

They have both recently stepped up their military role in the conflict. The US, Turkey, Saudi Arabia and other Gulf Arab nations have long insisted Mr Assad cannot play any long-term role in Syria’s future.

Mr Jubeir told the BBC that there was “no doubt” Mr Assad had to go. “He will go either through a political process or he will be removed by force,” he said.

Meanwhile, Iranian Foreign Minister Mohammad Javad Zarif said that other powers had realised that there was no way reaching “a reasonable solution” to the Syrian conflict without involving Tehran.

Iran’s Quds newspaper sees Iran’s invitation to the talks as US “acknowledgement of Iran’s influential position in resolving the Syrian crisis”.

Saudi Arabia’s Al-Jazirah warns of “more Iranian political and military expansion” should Mr Assad remain in power, leading to Tehran “[reshaping] everything for its own benefits”.

Lebanese daily Al-Nahar speculates that the US’s “sudden decision” to invite Iran to the talks “reflects changes that occurred because of the Russian military intervention”.

Jordan’s Al-Ra’i notes that Iran’s inclusion “would be in support of Russian diplomacy”, which was “standing alone” at previous talks.

Foreign ministers from the UK, France, Germany, Egypt, Lebanon and the EU have also confirmed they will attend the meeting, and other Middle Eastern powers are also expected.

A Western diplomat called the Vienna talks “embryonic”, while another said that simply keeping opposing sides from walking out would count as success.

The foreign ministers held preliminary discussions on Thursday before the substantive talks on Friday.

Speaking after meeting Mr Zarif, the EU’s foreign policy chief, Federica Mogherini, said the Vienna talks would bring together “all the relevant actors playing around the same table, trying to define a common space for the beginning of a political process”.

US Secretary of State John Kerry also met Mr Zarif on Thursday, as well as the Russian Foreign Minister, Sergei Lavrov, and the foreign ministers of Saudi Arabia and Turkey.

He described recent US air drops of weapons and ammunition to the rebels as “a reflection of the desire… to intensify a strategy that has shown some [promise].”

Iran is believed to have spent billions of dollars over the past four years propping up Mr Assad’s government, providing military advisers and subsidising weapons.

However, Syria’s political opposition has warned that Iran’s involvement will only complicate the meeting in Vienna.

Iran has long acknowledged sending military advisers to Syria, but has denied the presence of any ground forces. Despite that, unconfirmed reports earlier this month said that hundreds of Iranian troops had arrived in Syria.

They were reported to be joining government forces and fighters from the Lebanese Shia Islamist movement, Hezbollah, in assaults on rebel positions in northern and central Syria.

Russia began its military intervention in Syria at the end of last month, launching air strikes in support of Mr Assad.

Washington has accused Moscow of concentrating its air campaign in Syria on moderate opposition groups rather than on the Islamic State militant group.

Why is there a war in Syria?

Anti-government protests developed into a civil war that, four years on, has ground to a stalemate, with the Assad government, Islamic State, an array of Syrian rebels and Kurdish fighters all holding territory.

Who is fighting whom?

Government forces concentrated in Damascus and the centre and west of Syria are fighting the jihadists of Islamic State and al-Nusra Front, as well as less numerous so-called “moderate” rebel groups, who are strongest in the north and east. These groups are also battling each other.

More than 250,000 Syrians have been killed and a million injured. Some 11 million others have been forced from their homes, of whom four million have fled abroad – including growing numbers who are making the dangerous journey to Europe.

How has the world reacted?

Iran, Russia and Lebanon’s Hezbollah movement are propping up the Alawite-led Assad government, while Turkey, Saudi Arabia and Qatar back the more moderate Sunni-dominated opposition, along with the US, UK and France. Hezbollah and Iran are believed to have troops and officers on the ground, while a Western-led coalition and Russia are carrying out air strikes.

Four years into Syria’s civil war, and with Russia now conducting its own bombing campaign there separate from that of the US-led coalition, the conflict looks more dangerous than ever.

But it has also created a new urgency to try to find a way out of the fighting.

Some of the impetus comes from Russia, keen to be seen as a major player and anxious, apparently, to keep its air strikes limited.

It is also due to a new readiness by the United States and Saudi Arabia to hear what Iran has to say – especially about the main point of disagreement: what role Syria’s President Assad should be allowed to play in any transition.

The Saudis and most Western powers see him as an obstacle. The Russians and Iranians argue he is a vital partner.

The test of this Vienna meeting is whether there is any movement towards a compromise.

But even without tangible progress, the very fact such a high-profile gathering is happening could mark an important step in the search for a way out of Syria’s nightmare.