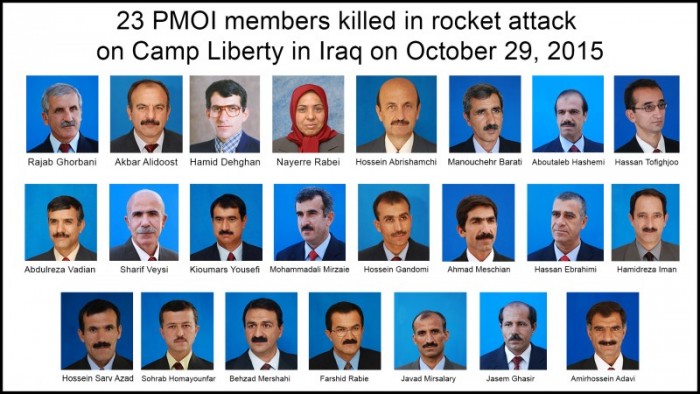 23 members of the main Iranian opposition group, the People’s Mojahedin Organization of Iran, PMOI (Mujahedin-e Khalq, MEK), were reportedly killed on Thursday, October 29, 2015, in a rocket attack on Camp Liberty in Iraq.
Share:

A barrage of rockets slammed late Thursday into a former military base near the Baghdad International Airport that houses an Iranian refugee group, killing three Iraqi soldiers, officials said. The Iranian exiles said at least 20 of their people died in the attack.

The statement from Mujahedin-e-Khalq said that “due to darkness of the night, the exact number of dead and wounded has not been  yet established.”

A police official added that the rockets landed far enough from the airport that they did not disrupt commercial traffic. A hospital official confirmed the casualty figures. Both officials spoke on condition of anonymity because they were not authorized to speak to the media.

This was not the first attack since Camp Liberty became home to the Iranian group, which is strongly opposed to Iran’s clerical regime. Last year, the Islamic State group was said to have fired rockets near to Baghdad International Airport as it attempted to destabilize the capital.

Maryam Rajavi, president-elect of the National Council of Resistance of Iran, the parent organization of Mujahedeen-e-Khalq, blamed the attack on Iran.

“The Iranian regime’s agents within the Iraqi Government are responsible for the latest assault,” she said in a statement. “The United States and the United Nations are fully aware of this reality.”

“We are consulting with the Government of Iraq to ascertain the full extent of this unprovoked attack,” the statement said. “No matter the circumstances, on this point we remain absolute: the United States remains committed to assisting the UN High Commissioner for Refugees in the relocation of all Camp Hurriya residents to a permanent and safe location outside of Iraq.”

Members of the Mujahedeen-e-Khalq were welcomed into Iraq by Saddam Hussein in the 1980s during the brutal war with neighboring Iran. Their fortunes turned sharply with the Iraqi dictator’s toppling in the 2003 U.S.-led invasion.

Iraq’s current Shiite-led Iraqi government, which has strengthened ties with Tehran, considers their presence in the country illegal.

The group regularly reports worsening health conditions within their isolated camp and accuses the Iraqi government of neglect and human rights abuses.