At least 40 killed in missile attack by Syrian gov. forces 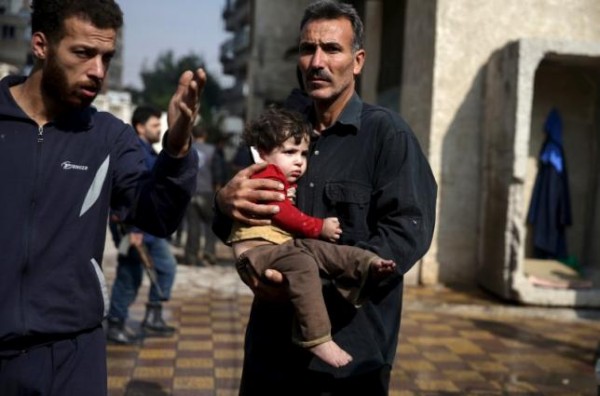 A man carries an injured child as another man gestures at a site hit by missiles fired by Syrian government forces on a busy marketplace in the Douma neighborhood of Damascus, Syria October 30, 2015. REUTERS/Bassam Khabieh
Share:
At least 40 people were killed and about 100 wounded when Syrian government forces fired missiles into a marketplace in a town near Damascus, a conflict monitor and a local rescue group said on Friday.

The Syrian Observatory for Human Rights, which monitors the war through a network of sources on the ground, said government forces fired 12 missiles at Douma, 10 miles (15 km) northeast of Damascus.

Douma has suffered intense bombardment in recent months in a wave of strikes the Syrian army has said targets insurgents that have launched attacks on government-held areas.

Syrian Civil Defence, a local humanitarian rescue group that operates in rebel-held areas, posted a picture on its Facebook page of about a dozen bloodied bodies laid on the ground on plastic sheeting and said more than 45 had died in the attack, which it said used guided missiles.

“Utterly heinous that while world leaders meet for peace in Vienna, attack(s) against civilians continue in Syria,” the group said on Twitter.

It linked to a video showing people tending to survivors in a chaotic scene of blackened rubble and fire. Footage showed bodies on the ground of the market place, where stalls had been blown to pieces. Reuters was unable to independently verify the events shown.

Many of Douma’s residents have fled the four-year-old conflict, moving to nearby rural areas. Medics say they have struggled to cope with large numbers of wounded in the intensified strikes.

Syria’s 4-year-old civil war has killed more than 250,000 people and driven more than 10 million from their homes. International diplomats were meeting on Friday at a peace conference in Vienna, the first to be attended by President Bashar al-Assad’s main ally Iran.
REUTERS