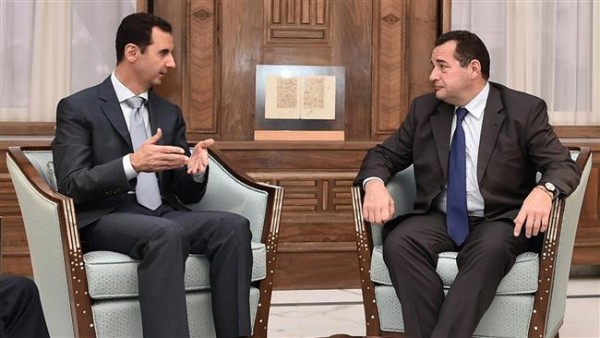 French opposition lawmaker Jean-Frederic Poisson (R) during his meeting in Damascus with Syrian president Bashar al Assad Oct. 28, 2015
Share:
Syrian President Bashar al-Assad renewed his accusation that Western states including France are supporting “terrorist” groups in his country’s conflict, at a meeting on Wednesday with a French parliamentary delegation.

“Several countries in the region and the West, including France, are continuing up until now to support terrorism by giving political cover to terrorist groups in Syria and the region,” he told three visiting rightwing legislators, quoted by state news agency SANA.

Assad said terrorism was “the main cause of the suffering of the Syrian people… along with the embargo imposed on Syria”, warning that it was “an international phenomenon which no border can prevent from spreading”.

Syrian authorities classify all opponents of the regime as terrorists.

Adopting a tough line on Syria’s conflict that has cost more than 250,000 lives since 2011, French President Francois Hollande said last week: “Nothing must be done to bolster Bashar al-Assad, who is the problem, and cannot therefore be the solution.”

But with pressure mounting within France to soften the position on Assad and seek a compromise, opposition lawmaker Jean-Frederic Poisson, part of the delegation which arrived in Damascus late Tuesday, said any settlement “necessarily requires a dialogue with the Syrian president”.