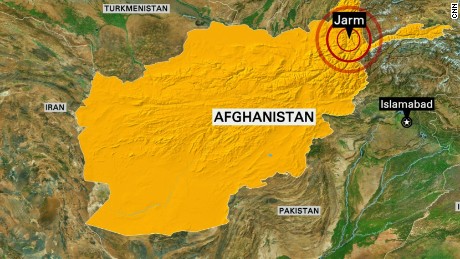 Pakistani officials say a powerful earthquake in a remote part of neighboring Afghanistan killed 62 people in northwestern Pakistan, bringing the total death toll from the disaster to 79.

Another Pakistani died when a roof collapsed in an eastern city. Thirteen people died in Afghanistan and three people died in the disputed Kashmir region claimed by India and Pakistan.

The U.S. Geological Survey said the earthquake had a preliminary magnitude of 7.5 and occurred at a depth of 212 kilometers (130 miles).

Mohammad Hanif, a top official at Pakistan’s Meteorological Department, says Monday’s quake did not cause massive destruction because the epicenter was so deep.

Afghan Chief Executive Abdullah Abdullah says in a tweet that the earthquake was “the strongest one felt in recent decades. There are reports of heavy casualties caused by the earthquake but exact numbers are yet to be released by government authorities.”

He did not provide further details.

Earlier he called an emergency meeting of disaster officials, which was broadcast live on television. He instructed doctors and hospitals to be prepared to receive and treat casualties.

He said telecommunications have been disrupted in vast parts of the country, preventing the government from getting a concise picture of damage and casualties.

He also called on officials to be prepared for aftershocks.