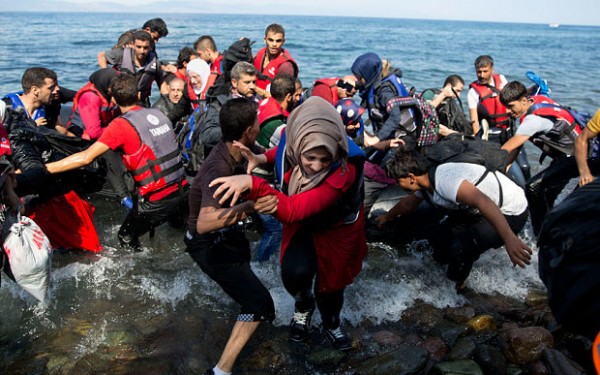 European Union leaders will on Sunday consider sending hundreds of guards to its borders with the western Balkans, as well as deploying more ships off Greece, as the bloc seeks to balance Germany’s welcome for refugees with tougher security measures.

Central and eastern European leaders meeting in Brussels may agree to send 400 border guards and set up new checkpoints if the EU’s frontier states drop their policy of giving arrivals passage to other countries, according to a draft statement seen by Reuters that must still be agreed.

“We commit to immediately increase our efforts to manage our borders,” the draft said, which, if formalised, would be a 16-point plan and the latest step in drawing up a common approach to dealing with the thousands of migrants streaming into the EU every day from the Middle East, North Africa and Afghanistan.

Many see it as an attempt by Juncker and Merkel to raise pressure on central and southeast European states to coordinate among themselves in managing the migration flow in a more humane way and end a series of unilateral actions.

“Every day counts,” Juncker said on Sunday in an interview in German weekly newspaper Bild am Sonntag. “Otherwise we will soon see families in cold rivers in the Balkans perish miserably.”

Still, some EU lawmakers in Britain and France have complained that all states should be there for the meeting at 1600 CET (1500 GMT) in Brussels and that France’s absence in particular could limit progress on a plan.

More than 680,000 migrants and refugees have crossed to Europe by sea so far this year, fleeing war and poverty in the Middle East, Africa and Asia, according to the International Organization for Migration.

Bulgaria, Serbia and Romania said they would close their borders if Germany or other countries shut the door on refugees, warning they would not let the Balkan region become a “buffer zone” for stranded migrants.

Hungary’s decision to close its border with Serbia and Croatia has prompted others to follow, stranding tens of thousands in dire conditions as temperatures drop, although Serbia’s Prime Minister Aleksandar Vucic has repeatedly said Serbia “will not build walls” to prevent entry of refugees.

Over the past nine days, the migrant route has shifted west to Hungary’s neighbour Slovenia where more than 62,000 migrants have arrived, with some 14,000 still passing through the country on Sunday.

Many more are coming from Croatia, which has already seen some 230,000 migrants pass through since mid-September.

“The challenge now is to slow down the flow of migration and to bring our external borders under control,” Juncker told Bild. “We must also make it clear that people who arrive at our borders who are not looking for international protection have no right to enter the EU.”

In the draft statement, the leaders seek to speed up repatriations of people from South Asia, namely Afghanistan and Pakistan, whose asylum requests are rejected because they are simply seeking a better life and not fleeing war or oppression.

Germany, which has troops in Afghanistan helping to stabilise the country under a NATO mission, wants the European Commission to negotiate an agreement on returning people to Afghanistan whose asylum applications have been rejected.

Following years of economic crisis, Europe’s governments are struggling to cope with an influx of people fleeing war and oppression in countries including Syria, where Russia’s intervention has complicated efforts to end nearly five years of civil war.

The head of the European Investment Bank, Werner Hoyer, warned that more will be needed despite progress in agreeing a relocation plan for migrants already in southern Europe.

“The immigration emergency will require enormous investments,” he said in an interview published on Sunday in Italian business broadsheet Il Sole 24 Ore.

Germany expects at least 800,000 asylum seekers this year, almost 1 percent of the population. As towns struggle to look after refugees and migrants and tackle right-wing attacks on shelters, Merkel’s message that Germany will cope looks optimistic to voters.

The lack of a common policy is also straining ties between European leaders, raising questions about the EU’s future.

Rights group Amnesty International said the 28-country bloc could not afford to end another meeting without an agreed plan.

“As winter looms, the sight of thousands of refugees sleeping rough as they make their way through Europe represents a damning indictment of the European Union’s failure to offer a coordinated response to the refugee crisis,” said John Dalhuisen, Amnesty’s director for Europe and Central Asia.