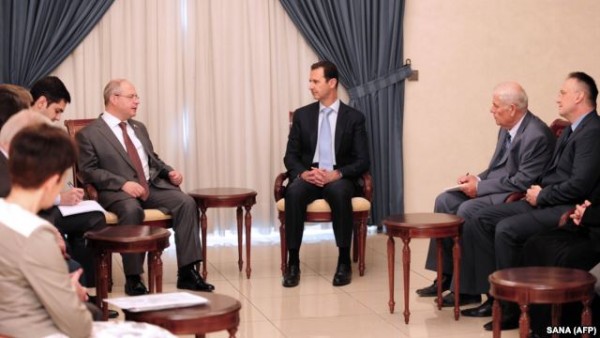 By ALBERT AJI and SARAH EL DEEB
President Bashar Assad is willing to run in an early presidential election, hold parliamentary elections and discuss constitutional changes, but only after the defeat of “terrorist” groups, Russian lawmakers said after meeting with the Syrian leader on Sunday.

The meeting came as Russia, the U.S., Saudi Arabia and Turkey were discussing new ideas for a political transition to end Syria’s nearly five-year civil war, which has killed 250,000 people and displaced half the country’s population.

The Western-backed Syrian opposition and other insurgent groups have refused to back any plan that does not include Assad’s exit from power, and were unlikely to view any elections held by his government as legitimate. The Syrian government considers the entire armed opposition to be “terrorists.”

“This is all political equivocation,” Munzer Akbik, a member of the main opposition Syrian National Council, told The Associated Press. “There is no sense in talking about elections now before a real transition of power.”

Communist lawmaker Alexander Yushchenko told the Tass news agency that Assad is ready to hold parliamentary elections “on the basis of all political forces that want Syria’s prosperity.” He said Assad is also ready to discuss constitutional reform and, if necessary, hold presidential elections, but only “after the victory over terrorism.”

Assad won re-election by a landslide in a vote held more than a year ago. His term expires in 2021.

The latest push for a diplomatic solution to the conflict comes in the wake of Russia’s intervention, which Moscow says is aimed at helping the government defeat the Islamic State group and other “terrorists.”

But most of Russia’s airstrikes have focused on areas where IS militants do not have a major presence, and have enabled a multi-pronged government ground offensive backed by Lebanon’s Hezbollah militant group and Iran’s Revolutionary Guard against other insurgent groups.

Assad told the Russian delegation that Moscow’s entry into the conflict is “the writing of a new history” and will determine the future of the region and the world, Syria’s state-run SANA news outlet said.

It quoted Assad as saying the eradication of terrorist groups would lead to a political solution that “pleases the Syrian people and maintains Syria’s sovereignty, independence and territorial integrity.”

After first questioning the presence of the Western-backed Free Syrian Army and calling it a “phantom structure,” Russian Foreign Minister Sergey Lavrov said Saturday that Moscow is ready to aid the group in its fight against IS militants. The FSA is an amalgam of rebel groups, some headed by defectors from the Syrian army, and includes factions armed and trained by the CIA and others backed by Saudi Arabia and Turkey.

FSA commander Lt. Col. Ahmed Saoud scoffed at the suggestion, saying “Russia must first admit that the regime of Assad must go.”

“What we care about is Assad leaving, not turning this from a war against the regime to a war against terrorism,” Saoud, a defected army officer who leads the 13th Division group, told AP. He added that Russia was still striking FSA positions.

On Sunday, the New-York based Human Rights Watch said at least two airstrikes on Oct. 15, described by residents as Russian, killed 59 civilians, including 33 children.

One of the airstrikes killed 46 family members, including 32 children and 12 women who were all related to a local commander affiliated with the FSA in the village of Ghantou, in the central Homs province. The second airstrike was in another town nearby, and killed 13 civilians and a local FSA commander when it hit near a bakery. It was not clear if the commander was the target, the group said.

HRW called on Moscow to investigate the attacks.

All previous peace efforts have foundered on the question of Assad’s fate, with the government and its allies insisting that he remain in power to oversee a transition and the opposition and its backers insisting he must go in order to end the war.

The conflict began with a wave of mostly peaceful protests in 2011 against the Assad family’s four-decade rule, and only escalated into a full-blown civil war when his forces launched a bloody crackdown on dissent.

U.S. Secretary of State John Kerry flew to Saudi Arabia Saturday. After meeting with King Salman and other officials, the two sides “reiterated the need for a transition away” from Assad and pledged to continue support for the moderate Syrian opposition.

A Saudi newspaper, Asharq al-Awsat, meanwhile published Saturday what it said was a nine-point Russian proposal floated at a meeting in Vienna.

The report said the proposal included setting a joint targets list between the countries conducting airstrikes in Syria, a cease-fire between the FSA and government forces and guarantees from Moscow that Assad will not run in the next elections. The proposal also included a clause that would allow Russia to keep its military presence in Syria, with necessary U.N. resolutions, as guarantee to the plan.

Abkik, the SNC member, said the meeting in Vienna was a “preliminary exchange of ideas” with a Russian focus on elections.

“What we know is that there has not been an agreement on the Assad knot,” Abkik said.

In comments to Asharq al-Awsat published Saturday, Saudi Foreign Minister Adel Jubeir said the Kingdom insists “on an independent body to manage the transitional period in a way that guarantees the territorial integrity of Syria without Assad’s presence; while Russia speaks of elections in search for a role for Assad.”