A Palestinian who rammed car into Israeli soldiers was shot, updates 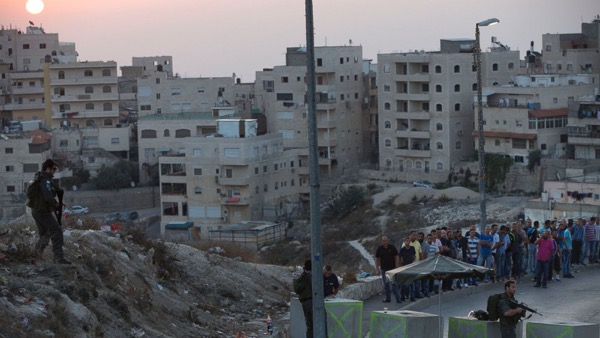 Israeli border police check Palestinians ID at a checkpoint as they exit the Arab neighbourhood of Issawiyeh in Jerusalem, Sunday, Oct. 18, 2015. Palestinian assailants carried out a series of five stabbing attacks in Jerusalem and the West Bank on Saturday, as a month-long outburst of violence showed no signs of abating. The unrest came despite new security measures that have placed troops and checkpoints around Palestinian neighbourhoods in east Jerusalem. (AP Photo/Oded Balilty)
Share:

Israeli police say a Palestinian drove his vehicle into a group of Israelis at a junction near Jerusalem, in the West Bank.

Spokesman Micky Rosenfeld said the attacker was shot and killed after the attack that injured two people.

Media reported the attacker drove his car into people standing on the side of the road, injuring a soldier and a civilian, and then jumped out of the vehicle and stabbed people with a knife before he was shot.

It was the latest in a series of Palestinian attacks against Israeli civilians and soldiers and the third incident on Tuesday.

It came as U.N. Secretary-General Ban Ki-moon is coming to the region to meet with Israeli and Palestinian leaders in an attempt to curb weeks of violence that has killed 10 Israelis, 43 Palestinians and an Eritrean migrant worker.

The head of the U.N. cultural agency says she “deplores” a proposal under discussion by UNESCO’s executive board that she says “could be seen to alter the status of the Old City of Jerusalem and its Walls” and incite further tensions.

The board is due to vote Tuesday on a resolution submitted by Arab countries that recognizes the Western Wall as a Muslim holy site.

In a statement, Irina Bokova calls on UNESCO’s executive board “to take decisions that do not further inflame tensions on the ground and that encourage respect for the sanctity of the Holy Sites.”

Israel has been working to block the UNESCO resolution, calling it an attempt to “distort history.”

The Western Wall is at the base of Jerusalem’s most sensitive holy site. The hilltop compound is revered by Jews as the Temple Mount, the site of the two biblical Jewish temples. Today, it’s home to the Al-Aqsa Mosque, Islam’s third-holiest shrine and a key national symbol for the Palestinians.

The initial outbreak of violence was fueled by rumors that Israel was plotting to take over the site. Israel has adamantly denied the allegations, saying it has no plans to change the status quo at the site, where Jews are allowed to visit but not pray.

Israeli man dies
The Israeli military says an Israeli man has died after being run over during a clash with Palestinians in the West Bank.

An Associated Press photographer who witnessed the incident says the man exited his car after Palestinian demonstrators threw stones at it and he began to hit passing Palestinian cars with a large stick similar to a baseball bat.

The man hit a passing truck with the stick, and the truck ran the man over.

A Palestinian security official says the truck driver turned himself in, saying he hit the Israeli by accident while trying to swerve out of the way. The official spoke on condition of anonymity because he was not authorized to speak to the media.

Israel’s prime minister is accusing the Palestinian president, Mahmoud Abbas, of “irresponsible behavior” during the past month of violence.

In a speech Tuesday, Prime Minister Benjamin Netanyahu repeated previous assertions that Abbas has failed to condemn a string of Palestinian attacks. He called on Abbas to “stop lying, stop inciting.”

In weeks of unrest, nine Israelis and 42 Palestinians have been killed, along with an Eritrean migrant worker.

Abbas has not condemned the violence outright, and last week he falsely accused Israel of executing a teenage Palestinian attacker who was actually recovering in a hospital.

But he has said Palestinians should stick to what he calls “popular resistance,” which includes marches and stone throwing. He has also said armed attacks go against Palestinian interests.

Israel’s opposition leader says the Israeli-Palestinian unrest that has rocked the country over the past month is providing a glimpse of the future if the Palestinians do not receive a state of their own.

Isaac Herzog told a conference in Tel Aviv on Tuesday that “when you look at Jerusalem, you understand what a binational state looks like.” He says the current situation can’t continue, and that “separation between the people has to be implemented.”

He says Israeli leaders “can’t keep living under this illusion that everything is fine and you can just manage the conflict.”

The Palestinian foreign minister says U.N. Secretary-General Ban Ki-moon is coming to the region on a surprise visit to try and bring an end to the monthlong wave of violence.

Riyad Malki told Palestinian radio that Ban will arrive later Tuesday and meet with both Israeli and Palestinian leaders. The visit comes amid a spate of deadly attacks that have sparked fears of another full-fledged Palestinian uprising.

Over the past month, nine Israelis have been killed in Palestinian attacks, most of them stabbings. In that time, 41 Palestinians were killed by Israeli fire, including 20 labeled by Israel as attackers, and the rest in clashes with Israeli troops. An Eritrean migrant died after being shot and beaten by a mob that mistakenly believed he was a Palestinian attacker.

Ban has issued a video message ahead of the visit calling for calm on both sides. He said he understood the Palestinian frustration but that violence would only harm their legitimate aspirations. He said to the Israelis that he understood their concerns and fears due to the security deterioration, but added there was no military solution to the situation.

Israel has arrested a top Hamas official in the West Bank, accusing him of inciting recent violence.

The military says it arrested Hassan Yousef on Tuesday near Ramallah. It marks the most high-profile arrest since a wave of unrest swept through the region a month ago.

The military said Yousef had been “actively instigating and inciting terrorism” by encouraging attacks against Israelis. Military spokesman Lt. Col. Peter Lerner says, “Hamas’ leaders cannot expect to propagate violence and terror from the comfort of their living rooms and pulpits of their mosques.”

Yousef is a co-founder of Hamas whose son, Mosab, later spied for Israel between 1997 and 2007.

Home of a Palestinian demolished

The Israeli military has demolished the home of a Palestinian who killed an Israeli woman last year.

The measure is one of the recent steps Israel has undertaken to counter a wave of attacks that have killed nine Israelis in the past month, mostly in stabbings. At least 41 Palestinians have been killed, including 20 identified by Israeli authorities as attackers. The rest died in clashes with Israeli forces.

The military says forces demolished the residence of Maher Hashlamoun early Tuesday in Hebron. Last year, Hashlamoun rammed his car into 25-year-old Dalia Lemkus in the West Bank and stabbed her several times. Hashlamon was shot and killed.

Israeli military spokesman Lt. Col. Peter Lerner says the demolition “sends a clear message that there is a personal price to pay when you are involved in terror.”