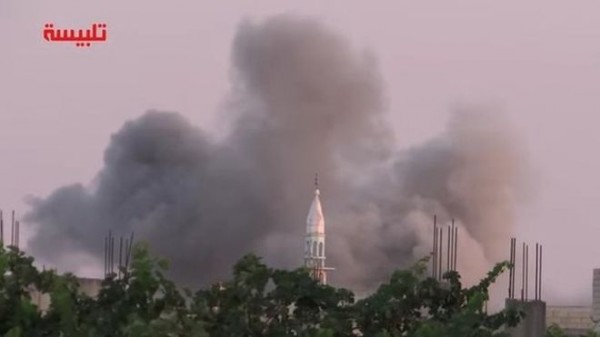 Syrian troops and their Hezbollah and Iranian allies, backed by Russian jets, attacked rebel-held towns north of the city of Homs on Thursday, targeting a long-held and strategic enclave of opposition to President Bashar al-Assad.

The offensive that began before dawn expands on over a week of ground attacks launched with Russian air support in areas of western Syria that are crucial to Assad’s survival and held by rebel groups other than Islamic State.

Syrian state television, quoting a military source, said the army had begun a military operation in the area after heavy air strikes and artillery barrages early on Thursday.

A few miles further north, there were heavy air strikes around the town of Talbiseh and other villages in the area, the Observatory said, as well as fierce clashes on the southern edges of the town and nearby villages.

The army operations include a campaign to recapture rebel-held land in Hama, Idlib and Latakia provinces in the northwest. Regional officials have also said the army, backed by Iranian reinforcements, is preparing for a ground operation around Aleppo city, close to the Turkish border.

Recapturing the area north of Homs would help reassert Assad’s control over the main population centers of western Syria and secure territory linking Damascus to the coastal heartland of his minority Alawite sect.

The military source quoted by state television said the army and its allies had taken control of the villages of Khalidiya and Dar Kabira, between Homs and Teir Malla.

The Observatory said the army had advanced in Khalidiya, but there was still heavy fighting there.

“There are very heavy air strikes in Homs on the frontlines. There are civilian casualties. The aim is to apply military pressure, and the regime’s intention is to storm the area,” said the leader of one rebel group operating in the area.

He said the number killed was not confirmed but gave the names of five documented dead including a girl and two women.

A resident of Talbiseh said four civilians had been killed there and that a school was hit at around 6 a.m., before classes started. He said jets were still flying in the area.

“They want to open up the road from Homs (north) to Hama. There’s no end to the aerial observation and the bombardment,” said Abdul Rahim Duhaik, a teacher in Talbiseh.

“People are busy digging shelters. No one has any intention of leaving. We will die in our land rather than be evicted”.

Responding to the reports of civilian deaths, the Syrian military source said Syrian forces and Russian jets do not target areas where civilians are present. He accused al Qaeda’s wing in Syria, the Nusra Front, of carrying out a massacre on Thursday so it could blame the deaths on the bombardment.

The source, quoted by state television, said the army had begun a military operation in the north Homs countryside after “concentrated air strikes and heavy preparatory artillery shelling on the terrorist groupings and their bases”.