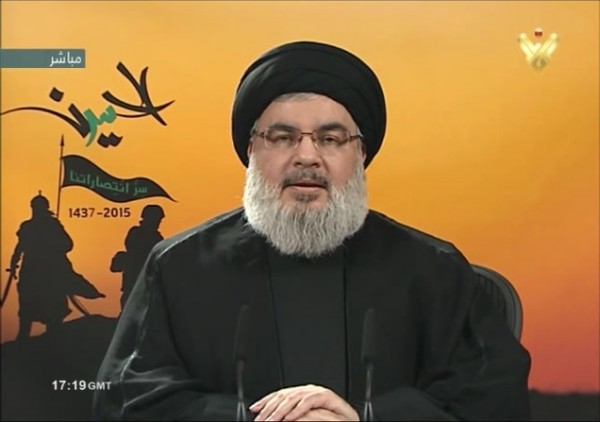 The head of Lebanon’s powerful Shiite Hezbollah movement on Wednesday backed a series of Palestinian attacks on Israelis, describing them as resistance and an “intifada”.

“I emphasise our absolute support for the rights of the Palestinian people and their intifada,” Hassan Nasrallah said in a televised address ahead of the Shiite Muslim religious holiday Ashura.

“It is incumbent upon us all to stand by the Palestinians and help them all we can, and to recognise the fact that the Palestinians have in front of them… no choice but the choice of resistance and intifada,” he added.

Nasrallah said the Palestinians were responding to “provocations by Israelis” and were seeking to prevent the “Judaisation of Al-Aqsa mosque”.

His comments come after a wave of mainly stabbing attacks by Palestinians against Israelis that have raised concerns of a full-blown uprising akin to the first and second intifadas.

On Wednesday, two more stabbing attacks were reported in Jerusalem, including one that wounded a 70-year-old woman.

Hezbollah is a fierce opponent of Israel and battled to push its forces out of southern Lebanon before their withdrawal in 2000.

The group fought a deadly month-long war with the Jewish state in the summer of 2006.

That conflict killed more than 1,200 people in Lebanon, mostly civilians, and some 160 Israelis, most of them soldiers.

In recent years, Hezbollah has skirmished with Israel on the demarcation line between Lebanon and the Jewish state, but avoided a larger-scale conflict.

Nasrallah lamented Wednesday the collapse of efforts aimed at reactivating the work of the paralyzed government, warning of a “more complicated situation” ahead.

“All attempts to revive the government were foiled for personal and partisan reasons, which clearly means that we will face a more complicated situation,” said Nasrallah .

“Those who torpedoed the solutions will realize that they have committed a big mistake,” he added without elaborating .

Nasrallah cited “the paralysis of the institutions, the continued abduction of the servicemen, the social crises and the garbage crisis.”

He, however, highlighted “the stable security situation and the ongoing dialogue” as “two positivities.”

The cabinet is expected to convene on Friday to adopt Agriculture Minister Akram Shehayyeb’s garbage disposal plan, reported the daily al-Mustaqbal on Wednesday.

Ministerial sources said: “The session will be its last due to the obstruction of the Free Patriotic Movement.”

Change and Reform bloc chief MP Michel Aoun stated on Tuesday that his ministers will not attend the session due to his objection to the failure to tackle the contentious issue of security and military promotions and appointments.

Nasrallah lashed out at Saudi Arabia over the recent Mina stampede, stressing that “this tragedy will have great impact on the end of this historic oppression by Riyadh in the holy country.”

“There are hundreds who are still missing. At least there is a Saudi incompetence in handling the Hajj pilgrimage for this year,” Nasrallah was quoted by Hezbollah mouthpiece Al Manar as saying .

He claimed that Riyadh has been firmly refusing that any country take part in the investigation into Mina stampede, stressing that participating in such probe is a just demand by any country whose nationals died in the incident.

He slammed some countries whose nationals died in the incident for being silent. On the other hand he praised the Supreme Leader of the Islamic Revolution in Iran,Ayatollah Ali Khamenei .

“The only loud voice against the Saudi performance was by Imam Sayyed Ali Khameni.” Nasrallah was quoted by Al Manar as saying.