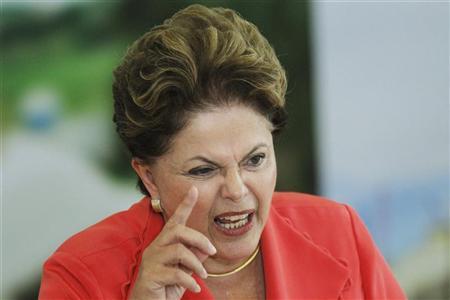 Rousseff told a gathering of union leaders in Sao Paulo – Brazil’s business capital – that the opposition was trying to incite a coup, but that she would staunchly defend a “project that has lifted millions of Brazilians out of poverty”.

“I will rise up against coup plotters and their conspiratorial actions, I’m not scared of them,” Rousseff declared in the 35-minute speech to cheering supporters, although she stopped short of calling out political rivals by name.

They were her most combative statements since a court last week ruled that her administration manipulated accounting to disguise a swelling deficit as she campaigned for re-election last year – giving fresh ammunition to opponents who have been calling for her impeachment for months.

Rousseff defended her government, arguing that any eventual breach of Brazil’s fiscal responsibility law was the result of efforts to maintain social programs for the poor in the light of a deteriorating economy.

“These are moralists without any morals” she shot back on Tuesday, adding that she is not the target of any ongoing investigation.

All eyes on speaker

Opposition parties wanted to force a vote in Brazil’s Congress that could have opened impeachment proceedings against Rousseff this week, but a Federal Supreme Court ruling on Tuesday suspended the manoeuvre.

Lower House Speaker Eduardo Cunha is analysing three impeachment requests, including one by lawyer Helio Bicudo, a former Rousseff ally who alleges she doctored government accounts to prop up her re-election chances.

Some of Rousseff’s advisors, as well as members of her ruling coalition, are also under investigation for a graft scheme at several state firms, a scandal known as “Operation Car Wash.”

As speaker, Cunha has the power to shelve such requests or give them the green light, a move that would trigger a bruising battle that could prompt a full-blown political and economic crisis in South America’s biggest country.

The Supreme Court’s ruled that a decision on accepting any of the impeachment requests lodged in Congress can only be taken by Cunha himself and not by other opposition figures.

This means that Cunha must take full responsibility for triggering the process.

The timing of Cunha’s next move is also seen by analysts as being bound up with his own struggles to escape corruption allegations, including that he hid millions of dollars in Swiss bank accounts.