France, Saudi Arabia deepen alliance with 10B euros in deals 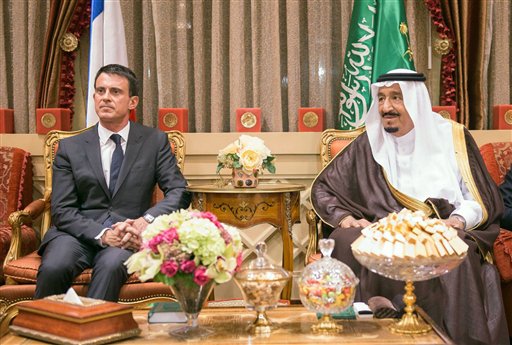 Valls, who announced the deals on his official Twitter account, is in Saudi Arabia with a large delegation of French business representatives and top officials, including Foreign Minister Laurent Fabius and Defense Minister Jean-Yves Le Drian.

France’s Foreign Ministry said in a statement that the deal includes the start of negotiations to provide Saudi Arabia with its own communication and observation satellites — something the kingdom has been coveting as it expands its regional military reach and fights a war against Shiite rebels in Yemen.

The two sides also signed deals in Riyadh for $2 billion worth of Saudi public investment in French private funds with a focus on renewable energy and signed a letter of intent for cooperation in that sector. They also signed a cooperation agreement to establish a naval research center and to increase joint military training exercises.

The two countries agreed to hold another joint session in Paris next March.

The visit to Saudi Arabia is part of a regional tour that included stops in Jordan and Egypt, where a $1.1 billion deal for two French Mistral amphibious assault ships was signed.

A French official, who spoke anonymously because he was not authorized to speak to the media, says a military helicopter deal is also expected to be signed in Riyadh. In June, Saudi Arabia signed agreements worth billions of dollars to buy 23 helicopters for the Interior Ministry, 50 Airbus jets and two possible nuclear reactors from France.

The alliance between France and Saudi Arabia has grown stronger in recent years as ties between Washington and Riyadh cooled under President Barack Obama, particularly following his administration’s strong backing of a nuclear deal between Iran and the world powers.

Though France was a part of the nuclear negotiations, its position has more strongly reflected Saudi concerns that the deal could bolster Iran’s influence in the region if economic sanctions are not lifted gradually. Iran and Saudi Arabia back opposite sides in the civil war in Syria.

Saudi Foreign Minister Adel al-Jubeir said in a press conference Tuesday with his French counterpart “there is no future” for President Bashar Assad in Syria, who is backed by Iran and Russia.

The French delegation additionally took part in a business forum. According to Saudi media, France is the third largest investor in Saudi Arabia and has more than 80 companies operating in the kingdom, employing around 11,000 Saudi nationals.

Saudi Arabia is seeking to diversify its economy away from oil and to create more jobs in the private sector for its growing young population. A slump in oil prices has gutted the kingdom’s most important source of revenue, forcing it to run a budget deficit and draw from its large foreign currency reserves.

“It’s actually based on contracts that will materialize,” he said. “The Saudi-French business ties are very deep and old, and quite extensive and cover many sectors ranking from defense, security, health care, retail, food sector. It’s very important for Saudi’s diversification efforts.”

The visit to Saudi Arabia comes after Paris expanded its airstrikes against the Islamic State group by targeting IS militants in Syria last month for the first time. France had previously targeted IS militants in Iraq, where the group also holds territory. France and Saudi Arabia are both part of the U.S.-led coalition bombing IS.

The strong alliance between France and Saudi Arabia was highlighted in May when French President Francois Hollande met with the heads of state of the six-nation Gulf Cooperation Council in Riyadh for a meeting in his honor. And in November, France and Saudi Arabia signed an agreement to provide the Lebanese army with $3 billion worth of weapons paid for by Riyadh. The Lebanese military is widely considered much weaker than the Shiite Hezbollah militant group, which is armed and funded by Iran.